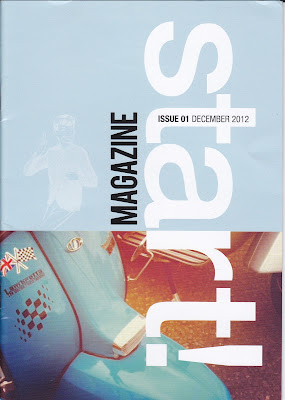 There’s something wilfully archaic about producing a fanzine in the modern age. As a form of communication it is usually limited in content, timeliness and potential readership, so discovering a new one makes me admire the contrariness yet question the motive. Yes, it is preferable to read a physical document than a screen but if one has something to worth saying is it the best place for it?

Issue one of Start! is a slim, colour, A5 production and a slightly mysterious affair. There is no introduction or even an editor’s name, just an email address. It is dated December 2012 and the full-page club adverts within are for this month. Whether this implies a monthly schedule and it is in fact an advertising tool for a group of promoters we’ll have to see. In fairness it does refer to itself as a magazine rather than fanzine which might explain a little the lack of charm but also raises expectations. Either way the best fanzines and magazines are those drawn from the personality of an editor who feels a compulsion to share his or her passions.

Once past the unoriginal name, the uninspiring front cover and photographs of parkas and Union Jacks at the Brighton Mod Weekender there are some pieces to read and it’s neatly laid out. There’s an affectionate reminisce about Paul Weller’s Respond signing The Questions; Small Faces biographer John Hellier discusses his involvement with the early 60s mod scene (and includes his full CV as if touting for work which is a bit odd); and Sean Flowerdew plugs his London International Ska Festival across two articles (which share some of the same text). However, part one of a guide to 1960s television describing The Avengers and The Prisoner in three or four lines is quick filler material, as is another whole page given to six sentences by The Moons. You can decide whether that is enough to part with £2.40 (£1 cover price plus another £1.40 for postage).

Start! may feel it’s not important for me to know their names and communicating with me for two minutes is enough, but I want to feel their passion. I’ve been critical of other first issues of fanzines which have then greatly improved (for example Heavy Soul) so fingers crossed future editions will allay some of my nagging doubts about this one.

Start! is available from start1960mag@gmail.com
Posted by Monkey at 10:07