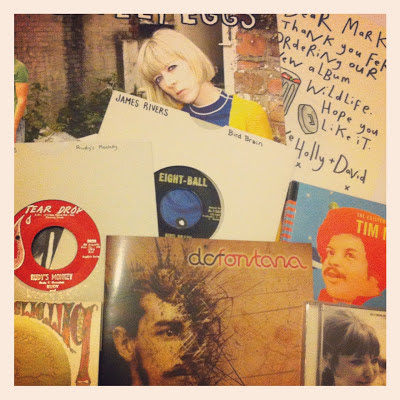 1. Rudy and the Reno Bops – “Rudy’s Monkey” (1964)
Sounds like an early Stax instrumental but Rudy Tee Gonzalez y sus Reno Bops were out of San Antonio, Texas where they recorded this for the Crazy Cajun, Huey P. Meaux, and his Tear Drop Records.

2. James Rivers – “Bird Brain” (1966)
When Ian Whiteman entered the studio to record the first Mighty Baby album producer Guy Stevens turned to him and asked what he had in his hand. “A flute,” said Ian. “I don’t do flutes,” replied Stevens. Taking a hard-line mod approach you can see where Stevens was coming from yet mods down the Scene would've blocked along merrily to "Bird Brain". Rivers takes the standard “Hi-Heeled Sneakers” pattern, adds some blues harp, and then drops in some out of sight funky flute.

3. Sandie Shaw – “Heaven Knows I’m Missing Him Now” (1969)
So this is where Morrissey got that title. Must acknowledge Tony Fletcher’s excellent A Light That Never Goes Out Smiths biography for bringing it to my attention, not only for Smiths trivia but because it’s the best song I've heard by Sandie. Also, it was only the other day Mrs Monkey and I both simultaneous twigged the name Sandie Shaw is a play on Sandy Shore. In all my days the thought had never crossed my mind. Der!

4. The Mayberry Movement – “Two Wrongs Don’t Make A Right” (1974)
I don’t know anything about The Mayberry Movement but in my mind’s eye they’re dressed in yellow flared suits with large lapels, chunky Mr Silly shoes, velvet bow ties, have huge afros (apart from a short balding fella on the end), and are doing a clumsy dance routine on Tops of the Pops after being introduced by a kiddie fiddler or sex pest.

5. Tim Maia – “Brother Father Mother Sister” (1976)
Maia was the Brazilian Funk/Soul Godfather who named his first four albums Tim Maia; bought hundreds of hits of acid in London to take back to Brazil to share with friends and unwitting record company employees; converted to a religious sect; only wore white clothes and played white instruments; and waited for a flying saucer to come and rescue him from earth. Find out more about this fruitloop on The Existential Soul of Tim Maia a highly recommended new collection released by Luaka Pop.

6. The Sunchymes – “Revelations In Her Mind” (2009)
Always a good sign when bands use “a garage Y” in their name. This isn’t garagey though; more a bedroom Brian Wilson from their charming long-player Let Your Free Flag Fly.

7. Chicros – “Can’t Stand Me Now” (2011)
If only some French musicians would do a doo-wop version of the Libertines song…

8. Neil Young & Crazy Horse – “Driftin’ Back” (2012)
People are given “Be nice to me I gave blood” stickers when they’ve given an armful as it can make them feel a little weak; which brings me to Psychedelic Pill. Old Shakey and his nutty horsemen spend an hour and a half meandering through a mere nine tracks; the first alone, “Driftin’ Back”, clocks up nearly 28 minutes before Neil says he’s going to get himself a hip-hop haircut and disappears. Anyone managing to take the whole pill in one thoroughly exhausting sitting deserves a medal, let alone a sticker. I'm off for a lie down.

9. DC Fontana – “Pentagram Man (Don Fardon Vocal Version)” (2012)
I wasn’t overly impressed when I saw 60’s freakbeaters The Sorrows recently but did wonder what Don Fardon would sound like given something new to sing. Lo and behold, up he pops lending his lungs to a swirly-soul version of the recent DC Fontana track.

10. The Lovely Eggs – “The Castle” (2012)
They’ve been edging towards something like this for a while and here it is closing their new - and best so far - LP, Wildlife: a dark droning psychedelic maelstrom tastier than all the sausage rolls in Lancaster.
Posted by Monkey at 22:43