DARROW FLETCHER at the 100 CLUB, LONDON 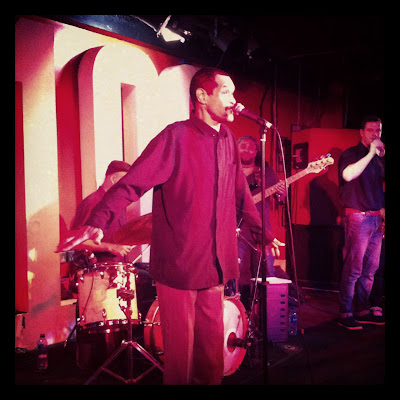 Darrow Fletcher occupies a special place in the hearts of many rare soul fans, in particular to the mod corner that has congregated to the left of the 100 Club stage at 6T’s Allnighters for as long as I can remember. Fletcher’s pair of 1966 thumpers “The Pain Gets A Little Deeper” and “My Young Misery” are super-strength mod dancefloor magnets, with the more traditional northern soul of “What Good Am I Without You” and the classy sophistication of “What Have I Got Now” not far behind.

For Darrow to guest at Kent Records’ 30th Anniversary party was therefore something to savour and an extra week of waiting after his passport was deemed “too scruffy” to travel from Chicago only added to the sense of anticipation. Soul acts can be hit or miss, especially when plonked in front of aficionados after years of inactivity. The night Ray Pollard did a similar performance here in the late 80s will stay with me forever – I’ve never experienced such love and adulation shown to an artist - but others have been less successful although that’s not really the point of these types of event.

Darrow was good, no two ways about it. His voice is understandably a bit rusty and he can’t hit all the notes but he can still hold a tune. I’ve always been amazed that he was only 14 when he recorded “The Pain Gets A Little Deeper” and when he stepped on to the stage it was hard to believe this still youthful man was now 61. Whilst many soul men are all glitz, bling and white suits, Darrow is resolutely “street” wearing nothing more ostentatious than a baggy shirt and pants (that’s American pants by the way). With his tiny stature and small glassy eyes he only needed a hoody and a bike and could’ve passed for a teenage drug runner.

Starting with “Changing By The Minute” he sang nine numbers, each to rapturous applause, including the four mentioned above plus nice 70s ones like “No Limit” and “Secret Weapon” (from his new Kent LP Crossover Records 1975-79: LA Soul Sessions) before returning for an extended “Pain”. It was over far too quickly, which speaks volumes not only for how enjoyable it was but how many great songs like “Infatuation” and “What Is This” were omitted. Kent are putting the finishing touches to a long-overdue collection of Darrow’s 60s material, due out next year; if Darrow can look after his passport they should bring him back.

Worth a purchase is the excellent CD Kent 30: Best of Kent Northern 1982-2012 which celebrates the label with some old classics and future floor fillers.
Posted by Monkey at 12:27