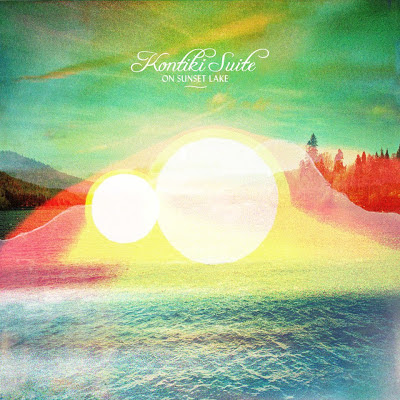 “’I’m gonna hang out with the stars in Hollywood, and look at how far I’ve come… I’ll be part of the LA scene.” - Hollywood by Kontiki Suite.

The distance from Kontiki Suite’s Cumbria to their Californian dream is over five thousand miles yet throughout their debut album they effortlessly glide back and forth between autumn leaves of their home and a sun kissed Laurel Canyon. It’s a gentle romanticism that radiates from an album of extraordinary beauty.

For ease of comparison imagine the space between Younger Than Yesterday and The Notorious Byrd Brothers and fill it with an album the Byrds might’ve made with Moby Grape. Any band picking nervously at a twelve-string Rickenbacker has a Byrds reference thrust on them, usually undeserved as they lack anything like their depth and imagination but its valid here. There’s lovely intricate playing - from mild psychedelia to log cabin country - and such care (and presumably expense) taken over the arrangements, the recording and the production. Everything is crisp and crystal clear, and without wishing to come over all What Hi-Fi? sounds even more incredible through headphones when all the delicate little touches can be heard.

I've previously described "Music Man" as “achingly beautiful” – which it is - but it in no way casts a shadow over the other twelve songs, all of which bowled me over with their magnificence. There’s clarity of vision, a confidence and an assurance in their style that makes the songs flow effortless along with no unwelcome interruptions. There’s no wasted moment, no weak song. On Sunset Lake isn’t an album containing great tracks; it’s an album of only great tracks. Most albums are front loaded with the best tracks coming early; not so here, they are all through it, and if anything On Sunset Lake is sequenced more like a gig with songs competing to outshine the preceding one until the climatic (and only long track) “Magic Carpet Ride" and encore of "The Painter". You'll never find a better track 9, 10 and 11 run than "Watching Over Me", "Autumn Fields" and "Music Man".

I’m struggling to remember when I last fell in love with a record as gorgeous as this.

To listen and buy On Sunset Lake click here.
Posted by Monkey at 18:12