ROGER DALTREY AND FRIENDS for the TEENAGE CANCER TRUST 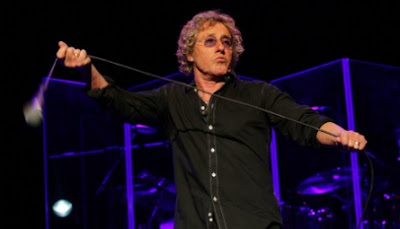 “This country's in a weird, feeble, grotesque state and it's about time it got out of it. And the reason it could get out of it is rock music! And I think that Pete Townshend, The Who, Roger Daltrey, Entwistle, Moon, could rise this country out of its decadent, ambient state more than Wilson and those crappy people could ever hope to achieve!”
Ken Russell talking to Russell Harty, 27 March 1975.

Bless old Ken. I don’t think many people still entertain the idea that rock music can change the country but credit to Roger Daltrey for trying to make a difference with his long-standing patronage of the Teenage Cancer Trust and his efforts in pulling together his annual fundraising gigs at the Royal Albert Hall. The trust, which receives no government funding, build specialist units within NHS hospitals to provide care and an environment designed to give teenagers the best chance of a positive outcome. The money raised by the TCT gigs, like the one on Wednesday, goes some way to change the lives of teenagers like Andrew, who shared his experiences on the big screen, and Jen and Katie there in person, on stage, to “celebrate their survival”. All three are inspiring young people and you'd need a heart of stone to not be moved by their stories and courage.

The night was billed as An Evening With Roger Daltrey, Paul Weller and Kelly Jones. There were guests. Some were special. Mostly they were Roger’s mates helping him out, and for that, I’ll ease off any heavy critique of the night. The help in financial and publicity terms given to TCT far outweighs any pithy comments I might usually make.

Roger began by playing a couple of folk tunes backed by fiddlers and an accordionist. Paul Freeman (no idea) played what he told us was his new single. Kelly Jones played what I assume were three or four Stereophonics songs backed by a string quartet, before bringing out Paul Weller to play keyboards and Ronnie Wood to play guitar on “Don’t Let Me Down” and “Ooh La La”.

Weller’s own set was next and I was looking for him to inject some life into proceeding but rather than strutting around sonically kicking he sat with four other geezers on stools playing guitars. They looked like a mod Westlife. “English Rose” was nice to hear and the arrangement of “All I Wanna Do” worked well, but even just seven songs dragged a bit for me.

After a beer and bog break Roger returned for “Who Are You”, a ropey “Kids Are Alright” and a decent “Behind Blue Eyes”, before making way for Amy MacDonald to sing three songs. She in turn made way for Steve Winwood who played “Higher Love” before a barnstorming “Gimme Some Lovin’”. Stevie's still got his pipes and pulverised the Hammond like a good un; unquestionably the highlight to that point.

Roger was then back for good and with his voice warmed up threw himself into an extended set of mainly Who classics beginning with “Pinball Wizard” and including “Won’t Get Fooled Again”, “I Can See For Miles” and a brilliant – and I mean brilliant - version of “Young Man Blues”, complete with his customary demonstration in the art of microphone swinging. I can’t think of many “rock stars” as likeable as Roger Daltrey. He cuts through any bullshit, has a lack of pretension, and comes across as sincere and passionate without preaching or sounding condescending. Quite how he’s managed fifty years with Pete Townshend…

After over three and a half hours, the show closed with Roger, a ukulele, and one of Townshend’s forgotten gems, “Blue, Red and Grey” from The Who By Numbers. I’ve seen Roger do this before but, under the circumstances, hearing him sing about liking every minute of the day was especially poignant and a lump-in-the-throat choice to end the evening.

To find out more about the Teenage Cancer Trust or to donate, click here.
Posted by Monkey at 17:23