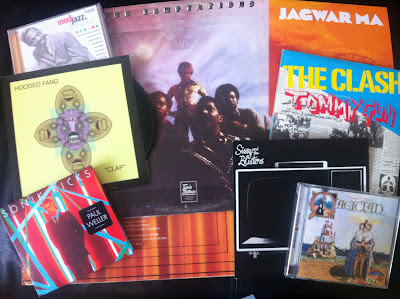 Every day I try to discover new music. These are among the ten best things to turn up this month.

1. The Reuben Wilson Quartet – “Rod Run” (1961)
Taken from the new Mod Jazz Forever compilation. Some of the tracks in the Mod Jazz series are a bit too lightweight but that’s not an accusation I’d level at “Rod Run” which, becoming of a former professional boxer, packs a mean Hammond and horns one-two.

2. Alex Chilton – “All We Ever Got From Them Was Pain” (1970)
Last month’s playlist featured a post-Big Star track by Chris Bell, this is a pre-Big Star one by Chilton and equal to anything they did together. It'll stop you in your tracks. Discovery of the month.

3. Andrew Leigh – “Magician” (1970)
Between stints in Spooky Tooth and Matthews Southern Comfort, Leigh cut an album with his buddies including Kevin Westlake, Gary Farr and Reggie King who plays piano and contributes clearly audible backing vocals on this title track, a looping folksy rocker. For an album sounding like it was made by people wearing collarless cheesecloth shirts, it’s a very good one.

4. The Temptations – “Zoom” (1973)
By this point they should’ve been called Norman Whitfield and The Temptations; a fact which disgruntled the Tempts so much it ended the relationship with their producer after the 1990 LP. This closing track is pure street-funk Whitfield.

5. The Clash – “1-2 Crush On You” (1978)
I’m guessing the politicised “Tommy Gun” was predominately the work of Joe Strummer whilst this innocent 60s Tin Pan Alley style B-side was more Mick Jones.

6. Ramblin’ Jack Elliott – “Arthritis Blues” (2006)
Nicky Wire wrote this month that the arthritis in his knees has made his stage jumps a thing of the past. Listening to Jack’s painful account, that’s the least of his worries.

8. Hooded Fang – “Clap” (2012)
There are illustrations of Mexican wrestlers on the sleeve of their 23 minute LP Tosta Mista. I so wanted that to be the band. It’s not. I’ve seen a picture of these limp indie kids and wouldn’t fancy their chances folding a letter let alone executing a quebrador con grio.

9. Jagwar Ma – “Come Save Me” (2012)
If Brian Wilson hears this on the wireless he'll wonder if he’s due any royalties. It'll certainly confuse him.

10. Paul Weller – “Green” (2012)
Not very long ago it was possible to dismiss Weller’s music in a single word: Dadrock. He was so much older then, he’s younger than that now. Or, to use one of Monkey Snr.’s phrases, he’s not as green as he’s cabbage looking.
Posted by Monkey at 17:05