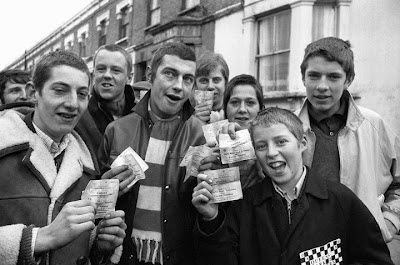 How many boxes does this photograph tick? Excited QPR fans proudly show their match tickets on the streets of Shepherd’s Bush before the FA Cup 6th Round tie against Chelsea on 21st February 1970. Somehow Loftus Road managed to squeeze in an incredible 33,572 people that day (current capacity around 18,500), yet despite goals by Terry Venables and Barry Bridges for the home side, Chelsea fluked a 4-2 win.

Thanks to Rob at the ever fascinating Another Nickel in The Machine for posting this picture on Twitter.
Posted by Monkey at 10:31