SPIRITUALIZED at the HACKNEY EMPIRE 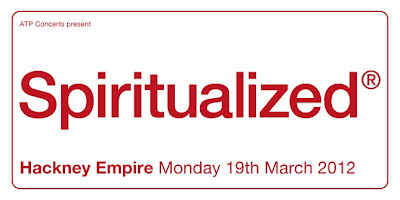 More bands should play the Hackney Empire. It’s a beautiful Victorian theatre offering excellent views even from the Upper Circle and a decent sound system. The only trouble is it’s in Hackney; great for us locals who can wander along but a right rigmarole for the rest of London who can’t be arsed to navigate their way using public transport; which might explain why I still was able to buy a ticket the day before and why more bands don’t play here. One assumes Spiritualized only played it to road test new material before hitting the bigger venues, making us among the first people to hear tracks from their forthcoming LP, Sweet Heart, Sweet Light.

As the curtain opened (see, I said it was a theatre) they set their dials straight to the heart of new nine minute single “Hey Jane” which encapsulates all the elements that make up Spiritualized: Velvetsy garage-rock, gospel choir, washed down with a gulp of druggy soup. The song, such as it is, only really lasts about three minutes; the rest is an elongated coda. That’s not an unusual occurrence, one idea or riff or chord repeated and repeated and repeated to create a hypnotic rhythm. There’s no point fighting it, it’ll drive you barmy, just feel it.

Later on, mid-way through a lengthy droning synth instrumental I started to hallucinate. My eyelids became made of stone and I swear to God the stage morphed into a giant white rug made from a polar bear and the monitors became its head and feet. I hadn’t been rummaging through Jason Spaceman’s medicine cabinet; this was a natural high, albeit one greatly assisted by two hours sleep the previous evening, a warm theatre, a thick pea coat, and a few cans of Guinness. Therefore I can only offer Spiritualized half the credit for this, if indeed nodding off at a gig deserves any credit at all.

I can’t tell you for certain what was new and what was old material as it’s a long time since I’ve played their early LPs and their aversion to snappy choruses and verses make recalling tracks, let alone titles, problematic. Jason isn’t one to say “Hey Hackney, how ya doing? This is a new one, hope you like it”. He of course says nothing; doesn’t even face the crowd, he stands sideways and plays across the stage to the other guitarist Doggen, who also stands sideways and faces him. There were a couple of times when the drawn out nature of unfamiliar songs did begin to test my patience but they threw in a few southern soul torch burners as relief. I’m struck by how many gospel and blues/heaven and hell references there are and wonder whether the fact everyone on stage right is dressed in white and everyone on the left black was a coincidence or divine intervention. Probably neither.

There was no “Come Together” which was a surprise, nor “Soul On Fire” which was a shame, nor “Death Take Your Fiddle” which would’ve blown my mind, but they did crank out “She Kissed Me (It Felt Like A Hit)” and “Electricity”, and ended with their finest fifteen-minutes-plus, the cinematic “Cop Shoot Cop”. On this showing Sweet Heart, Sweet Light might be a patchy album; bit like this gig.
Posted by Monkey at 15:56