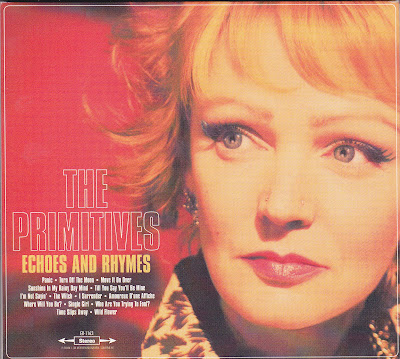 Washed up has-beens reform and make an album of cover versions. On the surface a difficult one to sell yet the first Primitives LP for 21 years is a triumph from start to finish.

The death of their bassist Steve Dullaghan acted as the catalyst for their reunion but rather than any sense of gloom this is a gloriously upbeat album of songs originally recorded by female-fronted 60s bands. Covers LPs can sound like randomly knocked together compilations but even though there’s a healthy variety of styles they slot together as fluidly af walking through different themed rooms at a big 60s club night like Le Beat Bespoke before ending back at an after-party.

I’ve witnessed many a swirling freak across Europe swish a technicoloured batwing to Bonnie St Claire’s “I Surrender” and it’s never been a favourite of mine but I like it here and that Euro psych theme is continued on “Amoureux D’Une Affiche” which is so ludicrously catchy it kept me awake last night as it sang through my brain.

If the more psychedelic beat numbers could’ve been predicted on past form, their venture into the soul cellar is perhaps more surprising. Little Ann’s “Who Are You Trying to Fool?” was a biggie a few years ago and whilst the soul purists may baulk at it being given the rumbling fuzz treatment it works a treat.

In fact, there isn’t anything that doesn’t work: from the pop-punk, psych-fuzz, soul-beat to dreamy-folk. I’ve played it a dozen times so far and not skipped a track once. Of the fourteen songs only one is longer than two minutes something seconds so it invites repeated plays. My favourite track changes each listen but right now it’s either the girl group swing of "Till You Say You'll Be Mine" or the sweet jiggering pop fun of “Turn Off The Moon”. And that’s it; it’s a fun album of shiny pop innocence heard through the flowers in the park on a cheap pink transistor radio.

You can keep your cash hungry big band reformations and your cynical marketing of “classic album” tours. Where’s the love of music? It’s here in Echoes and Rhymes.

Monkey picks eight out of ten bananas. Released by Elefant Records on 30th April 2012.
Posted by Monkey at 09:39