THE RIFLES at THE TROXY 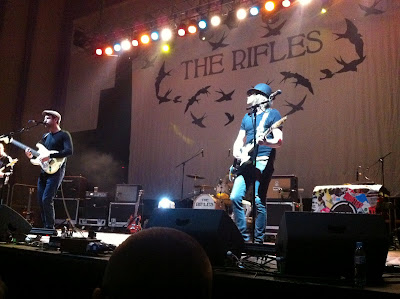 As geezerish cockney Saturdays go, yesterday took some beating. The players of Queen’s Park Rangers finally delivered what they’re paid to do and put in a committed performance resulting in a 2-1 win over in-form Arsenal; and East London band The Rifles provided a knees-up dahn Mile End where the conversation in the pub beforehand and in the Troxy was predominately football related. It was good to chat to blokes who’d been to West Ham (grumbling), Fulham (indifferent) and Rangers (delighted). I often wonder how well The Rifles do outside of the capital as they seem a very London band, albeit from the disappearing "working class" London where everyone is “mate” or “son”, rather than the trendy London of wannabe media types wearing moustaches and red jeans rolled up to their shins.

The band put in a typically workmanlike performance, there's nothing poncified about them. In Alfie, Michael Caine says he wants "proper grub, like Spam" - The Rifles are Spam. The crowd jumped about and heartily sang along to stuff about wanting a little peace and quiet from their bird. Drinks and plastic cups were lobbed in the air (there is even a Rifles branded beer). A stray shoe landed on the stage. My mate got punched in the head and had his glasses broken. It was a good night topping a good day. All that was missing was a bloke flogging cockles.
Posted by Monkey at 12:41