THE MUMPER by MARK BAXTER and PAOLO HEWITT 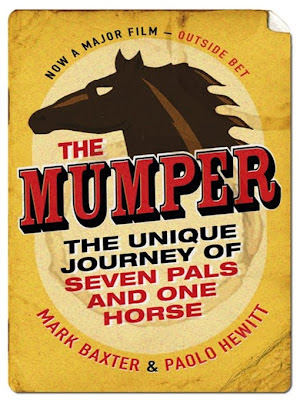 The Mumper was first published in 2007 and is a mainly autobiographical tale by Mark “Bax” Baxter, now taken up by a major publisher to tie-in with a new film.

It tells of Bax and his six mates, whose ages span fifty years, that meet every Sunday in a South London boozer. They rip the piss out of each other, bemoan Millwall’s latest result, talk nonsense, and enjoy each other’s company. Whatever else goes on in their lives, it's put to one side when the notes are chucked in the whip when Sunday comes. Bax (in real life) comes from solid mod stock, who I’ve sometimes said hello as he busies himself in the back room of my tailor George Dyer (Threadneedleman, 187A Walworth Road, SE17 for all your bespoke needs). Although there are the occasional references to mod (and George) they aren’t at the heart of the story.

The story isn’t far off an episode of Only Fools and Horses, or anything else from John Sullivan, with its comic yet loving portrayal of everyday folk, especially when a stranger enters the pub trying to offload a racehorse, which the group buy, name The Mumper, and dress in Millwall colours. “This time next year Rodney…” The story might (or might not) be a predictable one but the fate of The Mumper is secondary to the friendship and bonds that tie these seemingly disparate bunch of blokes.

Away from the pub Bax prints the daily newspapers on Fleet Street, an occupation shared by my own Granpop (who was no doubt one of the “Dad’s Army” referred to). I found those sections – set against the ugly mid-80s trade union dispute with Rupert Murdoch and the eventual sacking of 6000 workers – particularly interesting and dealt with commendably even-handedly.

The Mumper has now been made in to a film, Outside Bet, starring Bob Hoskins, and is released in cinemas on 27 April. The book is a light easy read (although the parts about the father did choke me) and I imagine the film will be a pleasant, quintessentially British affair worth a look (not least because Rita Tushingham and Dudley Sutton make appearances and Paul Weller wrote the title song). The makers are bound to take a few liberties with the story though. For a start, there’s no love interest in The Mumper; there are next to no women at all apart from Bax’s mum, unless you count barmaids. The book is very much a tale of male friendship and the way blokes deal with both happiness and sadness, and when they’ve the balls, how they follow their instincts. I liked it a lot. Go on The Mumper my son!

The Mumper by Mark Baxter and Paolo Hewitt is published by Orion, priced £7.99. Outside Bet is released by Universal Pictures UK on 27 April 2012.
Posted by Monkey at 16:15