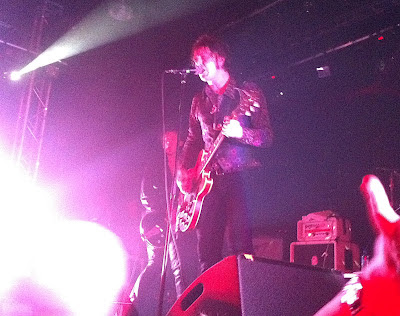 As unbelievable as it seems, back in 1980s Ben Elton was a fresh and seemingly savvy stand-up comedian. His Motormouth LP included a routine railing against audience participation, saying it was the performer’s job to perform and if someone asks you to pull a rabbit from their arse you should tell them to fuck off. “Do I ask you to come and polish my lathe?”

This isn’t an attitude shared by the Jim Jones Revue who request a few hundred people to work the elbow grease on their rock and roll machine. They aren’t even through their first song and Jones is breaking it down, imploring folk to “Let me hear you say YEEEAAAHHH!” He cups his ear. “I can’t hear ya!” he lies, but like his infamous namesake he’s a confident and persuasive leader. They shout “YEEEEEEEAAAAAHHHHH!” just that little bit harder.

Bands are never loud enough in the soulless 229 Club and tonight is no exception but, as always, the JJR put their shoulder to the wheel and furiously work the stage and the crowd: every song a high octane blast of raw power. The Little Richard/MC5 comparison has been done to death but they’re in no danger of shrugging it soon, even if they wanted to. The new songs being worked on for their third album follow the same blueprint as repetitive hammer blows “The Princess and the Frog” and “High Horse”. They might be a one trick pony but it’s a winning trick.

Jones introduces their final song and crowning glory, the magnificently raucous “Elemental”. He teaches the words. “It goes, Elemental… Elemental… Elemental”. His paid co-workers do their job, he gets a raft of free labour, and leaves the club with the most gleaming lathe in the factory. Job done.
Posted by Monkey at 09:45