After another depressing week of reading the on-line bickering and pronouncements on the Death of the Mod Scene, plus a few balls being taking home in a huff, it was a welcome relief to get to Brighton and find there’s plenty of life in the old dog yet.

Friday night at the Smugglers had yard for yard the smartest turnout I’d witnessed for ages and those that fret about ruining their tan suede driving shoes could’ve relaxed as friendly, civilized decorum mixed seamlessly with well mannered hedonism to a soundtrack heavily slanted in the R&B direction. 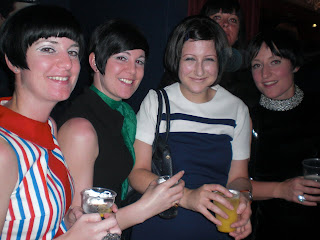 The Saturday and Sunday allnighters were less civilized (but no less fun) as a sell-out 400/500 crowd packed the Komedia Theatre. It’s increasingly difficult to get an aging scene (with some very notable and welcome exceptions) to run of the mill club nights but they’ll make the effort when presented with something special. From a DJ-ing point of view, it was a real buzz to play to an appreciative and enthusiastic crowd more into dancing than standing around (bit of pot, kettle and black there I admit), and in a venue with not only a cracking PA system but a decent sound engineer too. Also the fact mine and Speed’s sets tended to be next to each over the weekend, me playing R&B/Soul and he British Beat/US Garage, with no discernable difference to the dance floor showed people’s tastes aren’t always as black and white as you could be led to believe. 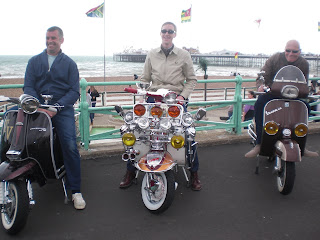 Sunday daytime saw the scooter ride-out and although numbers were small fry compared to what was happening at the Isle of Wight, they were up on previous years and I’d sooner see Mods on Mod scooters than any number of scooterists (or "trees" for those that are still scarred by the 80s) on whatever bastardized machines they want to inflict on the world. Some footage.

A weekend, as always, to meet old friends and new and rekindle the faith. Next year I’ll finally take the SX.

Here’s my playlist from Saturday (to save on space I'll skip the Sunday ones):