THE CAT INSIDE by WILLIAM S. BURROUGHS 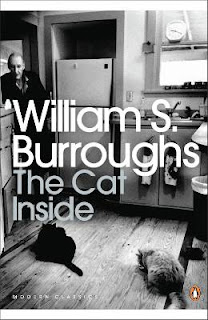 The Cat Inside, first published in 1986, was one of four Burroughs titles reprinted as part of the Penguin Modern Classics series last week, containing anecdotes, diary entries and dreams all about his love of cats and it’s quite unlike anything else in his canon. Bill, then in his early 70s, comes across as a sweet, slightly sentimental, old codger pottering about adopting stray cats and making small talk in the pet food store. It does little for his reputation as a literary outlaw but humanizes him and injects (pun unintentional) some belated warmth into his chilly persona. Here’s a typical entry:

“I don’t remember exactly when Ruski first came into the house. I remember sitting in a chair by the fireplace with the front door open and he saw me from fifty feet away and ran up, giving the special little squeaks I never heard from another cat, and jumped into my lap, nuzzling and purring and putting his little paws up to my face, telling me he wanted me to be my cat.” (Ahhh).

Burroughs is usually utterly distinctive but you’d never recognise him from that cute fluffiness. You’d maybe expect Ruski to then morph into some disease ridden alien life form that tries to fuck you up the arse before snapping your spine but he doesn’t. Bill’s fascination with guns and weapons was deep rooted but here cuddly Bill becomes furious after a badger is shot, goes into apoplexy about fox hunting and bemoans the destruction of rainforests like Swampy’s incensed Grandpa waving his cane.

But the focus is cats. If you’re not a cat person you’ll not get much out of The Cat Inside but if you’re stuck for a present for your feline fancying friend this’ll beat a moggy mug. It might even turn Granny on to Naked Lunch…