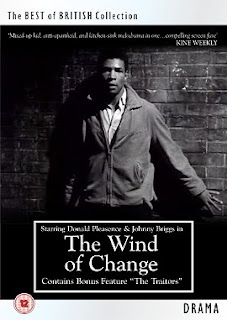 I love a good old black and white kitchen sink drama and so, it seems, do Odeon Entertainment as they continue to release forgotten gems of the genre on DVD for the first time, the latest being The Wind Of Change.

Set around Portobello Road and the Notting Hill race riots of ’58, the film stars Johnny Briggs – better known as demented pajama clad knicker boss Mike Baldwin in Coronation Street – as Frank, the leader of a racist Teddy Boy gang who also count a youthful David Hemmings in their ranks. The gang head out looking for “one of them” when they spot a black man with a white girl and proceed to do their business with bike chains and coshs. The couple happens to be Frank’s sister Josie and her new boyfriend.

The film then explores the relationships, attitudes and prejudices within Frank and Josie’s family. The mother sees little wrong in her precious boy, whilst Pops (Donald Pleasence) is more or less the voice of reason; he even keeps a black rabbit with his white rabbits and they get along. Not that it stops Pops, seemingly innocently, naming him Nigger. The racist language throughout would make even Alf Garnett wince and Briggs’ performance is frighteningly convincing in its moronic idiocy.

Hence the reason it’s not likely to be screened on the box. It’s a difficult film to love but as documentary and drama of the time (and probably, unfortunately, not just of it's time) it’s well worth investigating. The DVD comes with an extra film, the 1962 espionage thriller The Traitors. I’m no fan of spy capers so the highlight there was spotting a few Lambrettas on London streets.

The Wind Of Change/The Traitors is released by Odeon Entertainment and sells for £7.98 on Amazon. Other retail outlets are available.
Posted by Monkey at 17:49