KEROUAC AT BAT by ISAAC GEWIRTZ 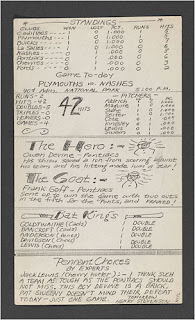 Jack Kerouac enthusiasts will be raising their glasses to the publication of Kerouac at Bat: Fantasy Sports and the King of the Beats by Isaac Gewirtz.

Readers of his biographies will know as a child Jack devised an elaborate world of fantasy sports games (primarily horse racing and baseball); not only inventing the games, with sticks and marbles, but creating tournaments, players, coaches, trainers, betting tips, then recording all the results, stats and news in painstaking detail on scorecards and in his own newspapers.

If the horse racing game was relatively simple and dropped by the age of sixteen, the baseball game was so baffling in its complexity as Jack wrestled to reflect every conceivable outcome of play, that he continued it right through his adult life; a fact he chose to keep from his beat buddies. Think how different On The Road might have been. “Hey Dean, instead of heading to that gloomy Mexican whorehouse, how about we play marbles?” “Wow! Yes Sal! Yes! Yes! Yes! That is of course what we must do. Think of the kicks we’ll have”.

Gewirtz’s book reproduces a mere 5% of the surviving collection of this curious, solitary occupation that reflects not only Jack’s imagination and thirst for recording events but how serious and obsessive he was with writing from an early age. Later he would meticulously log his daily word count and agonize if he hadn’t written enough, and even here as an adolescent he’d fill endless pages with neat penciled handwriting, before moving to the dense blocks of typed text seen in the scroll version of Road.

A curio for the collection but a welcome one.

Kerouac at Bat: Fantasy Sports and the King of the Beats by Isaac Gewirtz is published by the New York Public Library (www.nypl.org)
Posted by Monkey at 13:22