LAST DAYS OF THE CROSS by JOSEPH RIDGWELL 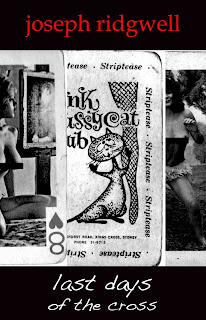 When I first came across Joe Ridgwell’s writing a few years back – mainly short stories scattered across the internet - he claimed to be the author of a novel Last Days of the Cross. After searching for it to no avail I put it down to self-mythologising bullshit, but no, here it finally is courtesy of new independent publishers Grievous Jones Press.

Ridgwell delivers straight down the line, no nonsense, no fussing, unpretentious, conversational storytelling where the words fly off the page. In Last Days of the Cross his romantic notion of becoming a poet lands him in Australia, where he assumes wondrous poems will come tumbling forth to critical acclaim and Joseph Ridgwell Appreciation Societies will be founded. That he chose Australia in the first place shows his head ain’t screwed on straight and further evidence of his rash heart-ruling-the-head nature comes when Joe falls for a junkie prostitute who’s just nicked his money.

There are obvious (and acknowledged) influences of both Arturo Bandini’s delusional claims of artistic greatness in John Fante’s Ask The Dust and Henry Chinaski’s need to hustle ridiculous jobs as poetry doesn’t put beer in the fridge from Charles Bukowski’s Factotum. Readers of those will find much to enjoy here as the tale wobbles from self-inflicted heartache to pure comedy on the turn of a page, leading to a cringing will-he/won’t-he dilemma when faced with an unexpected proposition.

Thoroughly recommend this and as good as it is I predict Joe’s next one will be even better. That appreciation society might not be too far away.

Last Days of the Cross by Joseph Ridgwell is published by Grievous Jones Press, priced £10. www.grievousjonespress.com.
In Search of the Lost Elation at www.josephridgwell.blogspot.com
Posted by Monkey at 17:25