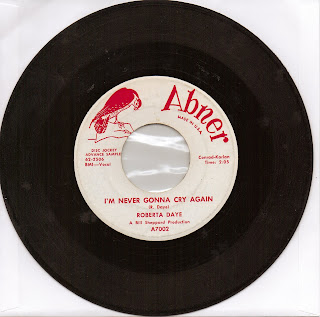 I know you lie awake wondering what I’ve been listening to. Wonder no more.

1. The Horace Silver Quintet – “Blowing The Blues Away” (1959)
Rule of thumb dictates jazz numbers with “blues” in the title should be avoided unless you fancy a eight minute nap. Silver demolishes that rule, leading his quintet with an almighty bash on the ole joanna in half the time and with twice the energy.

2. Roberta Daye – “I’m Never Gonna Cry Again” (1960)
John Manship has this neat popcorn 45 on sale for the frankly ludicrous sum of £150, which made the addition of it to the DJ box for £20 all the sweeter. Where do these prices come from?

3. Danny Brown – “Chewing Gum” (1962)
More piano pounding, this time on a R&B mover that’s begging for dance floor action. And will get it.

4. The Impressions – “Can’t Satisfy” (1966)
Take your pick. For some reason the new Impressions comp has a live version of this instead of the single version. It matters not.

6. George Harrison – “Let It Down” (1970)
Oh Christ on a tangerine bike, the Beatles are coming. Again. Batten down the hatches, September is gonna be a ‘mare as their albums are re-re-re-re-re-launched and some poxy computer game gets hyped to kingdom come. I’m taking refuge in Harrison’s triple LP All Things Must Pass to avoid anything John fucking Lennon related.

7. Bobby Womack – “Harry Hippie” (1972)
It’s lyrically naff and Womack makes Harry sound more like a tramp than a hippie but it’s a beautiful record nonetheless, helped by Bobby laying off his Mr Lurve Man growl for once.

9. The Milkshakes – “Love Can Lose” (1984)
He may not appear to play it often but there’s more than one string to Billy Childish’s musical bow, as this twangy reworking of The Who’s “Circles” testifies.

10. New Order – “All The Way” (1989)
History now decrees The Stone Roses as the defining album of 1989 yet it was New Order’s Technique that provided the soundtrack to that summer, with the Roses only truly catching on come November with “Fools Gold” and the Alexandra Palace gig, which although keenly anticipated, was a huge let down. Only two overtly acid-house numbers seriously date Technique, the rest is pure bliss, and to my ears still the album of ’89. But then I’m a willfully contrary so and so.
Posted by Monkey at 19:07