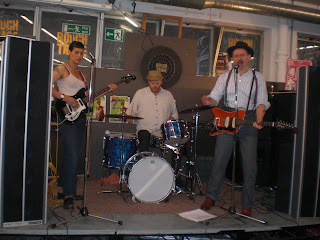 Unbeknownst to him, Billy Childish has been advertised as giving a poetry reading followed by a live set with the Musicians of the British Empire. He’s not best pleased. “I don’t like to mix it with my rock ‘n’ roll”, he says. “This young lady over here wanted to ask me what poets wear. All poets are vermin, that’s all you need to know”. But ever the honourable gentleman, if that’s what people have come for, that’s what they’ll get. Unprepared he only has his latest book of poems with him that he’d bought along to sell – not read. He doesn’t know them off by heart and doesn’t much fancy reading them, explaining that due to his dyslexia unless he’s read something hundreds of times he never knows the next line. “I can remember other people’s words; just not my own”. Not that it matters, Childish is such a charismatic raconteur that the poems read are in fact less entertaining than the chit-chat surrounding them, railing – comically - against everything from the Guardian, the Edinburgh Festival, promoters and audiences to poets.

One poem mentions a Walkman which Billy notes “really should be one of those, whatyoucallits, iPods. See, I know all the gear” he says with a grin and mischievous twinkle in his eye. He plays the role of man out of time wonderfully well and discloses that although he doesn’t own a mobile phone nor iPod, his wife Nurse Julie does and on Sundays whilst painting he has Beethoven playing from one. “Anyone listen to Ludwig van Beethoven?” Stony silence. “You should. One of the advantages of Beethoven is there’s no words to learn yet plenty of banging about”.

Along with Julie on bass and Wolf on drums it’s the banging about of MBEs that comes next. Being a relaxed afternoon session the band are in civvies rather than their normal battle dress with Childish sporting a 1940’s docker spruced up for an evening on the town look. With the safety net of his lyrics on the floor they set about crashing through a short, sweet yet predictable set. For someone with a back catalogue of over a 100 albums he repeatly draws from a small pool of songs and there’s inevitability about the set: “Misty Water”, “Joe Strummer’s Grave”, “A Quick One”, “Troubled Mind”, “Punk Rock Ist Nicht Tot” and “Fire”. Nurse Julie gets a ribbing for forgetting how to play “Troubled Mind”. “She’s got her pregnancy brain on. I might not remember words but I can remember chord sequences”. Such slap dash musicianship is part of the charm as the songs crudely crackle along fueled by their pure, honest and determined punk rock spirit.

Archive from 1959: the Billy Childish Story, a double CD set of 51 tracks spanning over thirty years is out now on Damaged Goods.
Posted by Monkey at 10:27