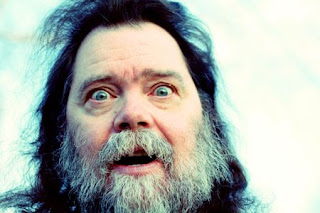 It’s the stuff of legend: Roky Erickson, front man for the first self-proclaimed psychedelic rock band, the 13th Floor Elevators, took over 300 acid trips, was busted for a small amount of pot, pleaded insanity to avoid jail, wound up in a Rusk secure prison for the criminally insane, diagnosed schizophrenic, treated with electroshock therapy, drugged to the eyeballs with Thorazine, formed a prison band with a bunch of child killers, became a reverend, was released three years later when ruled sane enough not to harm himself or others, was convinced he was a Martian and wanted to call his child Alien before settling on R2-D2 for a year. That’s far from the whole story, for that see Paul Drummond’s heroic telling of the whole incredible saga in his exhaustive biography Eye Mind.

For readers of Eye Mind, and especially viewers of Keven McAlester’s 2005 film You’re Gonna Miss Me, it’s an astounding achievement that Roky is back performing at all but his reluctance to play 13th Floor Elevators songs mean “Splash 1” and “You’re Gonna Miss Me” are tucked away at the end of his set. How enjoyable the preceding hour is depends, to a degree, on your tolerance for ghoulish heavy metalish ruminations on two headed dogs, demons, Lucifer, vampires, zombies, bloody hammers and men with atom brains.

Whatever, and however, he played would be enough for those simply wanting to pay their respects and offer encouragement to a rock ‘n’ roll pioneer who suffered for his art, and paid the price, more than most. Yet Erickson, although uncommunicative (not even a hello or thank you) and rooted to the spot in an eerie autopilot mode, is in fine performing fettle; playing sturdy rhythm guitar and his voice – that much imitated demonic Texan garage rock drawl – in such great shape there’s no need for the devil’s sympathy vote.

There are occasional stodgy moments but the playing of his sympathetic band is largely sprightly for such dark material. “Starry Eyes” adds a beam of light and “Don’t Shake Me Lucifer” sounds swiped from the Stones right under the nose of Primal Scream.

As Roky leaves to loving and rapturous applause he gently raises his fists and a glimmer of a well earned smile peeks through the mass of hair and scraggy Father Christmas beard.

An edited version of this review first appeared for Shindig! magazine
Posted by Monkey at 19:29