THE JIM JONES REVUE at the 100 CLUB 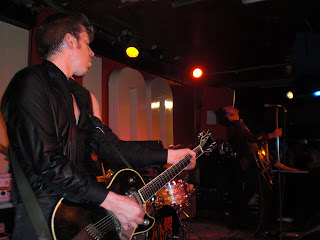 Like black clad outlaws in a spaghetti western, the Jim Jones Revue gallop in to town, shoot the shit out the locals, drink their whiskey, steal their women, and leave a trail of destruction in their wake.

Tonight they reduce the 100 Club to rubble with a blistering assault on the senses; like being slashed with broken bourbon bottles before being bludgeoned with bar stools by barflys protecting their territory.

Jim Jones has his posse meticulously drilled. James Brown would famously fine his Flames for dropped notes, Jim Jones you suspect fines his motley crue for any chord hammered home without a suitable shape being thrown. And believe me, every chord is hammered out with the intention of being the knockout blow.

Jones’ blood curdling screams and the distorted, pummeling, rockaboogie rhythm creates a frenzied commotion before the Revue ride out in to the sunset, mission accomplished.
Posted by Monkey at 11:29