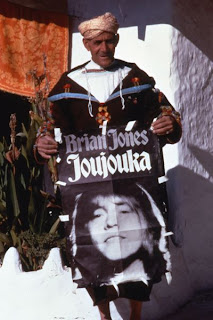 “From the mountains of Morocco, please welcome, the Master Musicians of Jajouka featuring Bachir Attar” goes the introduction to the rarefied splendour of the Royal Festival Hall. “Bet they don’t live there now” says some geezer behind me. He’s probably right of course but it misses the point.

William Burroughs described the Master Musicians as “the primordial sounds of a 4,000 year old rock ‘n’ roll band” and Brian Jones navigated his way to their secluded rural village hidden in the Jibala hills, 50 miles south of Tangier, to record them for Brian Jones Presents The Pipes of Pan at Joujouka. Brion Gysin - creator of cut-ups and inventor of the Dream Machine - introduced their music to both Burroughs and Jones and used the musicians as house band for his restaurant “The 1001 Nights” in the 1950s to enable him to listen to them every night. As hip patronage goes, that’s some trio.

Tonight the musicians are trimmed down to an eight piece unit; four ghaita pipes and four drums of varying sizes. Whether they actually needed the house PA is questionable and they certainly tested the expertise of the sound engineer. Those pipes squealed and wailed at such a volume I thought my ear drum was about to rattle clean out of my head. Hundreds of hands cupped ears in unison. Was as funny to watch as it was painful to listen to.

Fortunately that soon settled down and they got in their groove. Its clear why they sounded so incredible to those first Western discoverers – they still do, although we’re more savvy to “world music” now so there’s less a wow factor. The musicians, historically, have been supported by the farming toil of their fellow villagers and in addition to playing religious festivals their music is said to cure mental illness. The loony locals are tied up and the music banishes the madness. Although this can take “one month, or if someone is more sick he can stay two months, or three” according to Bachir Attar. Attar is the son of El Hadj Abdesalam Attar (see photo, with the different spelling of JouJouka ), who led the Musicians in the Brian Jones period, and who perhaps controversially has now trademarked the name “The Master Musicians of Jajouka featuring Bachir Attar”. It’s extremely hypnotic, trippy stuff (even without the aid of humungous quantities of hashish); repetitive but with subtle multi rhythms. Like ancient shoegazing.

They can play for up to ten hours, which would surely send folk mad not cure them, but tonight it’s a disappointingly short half an hour before they shuffle off to make way for headliner and Meltdown curator Ornette Coleman.

What is it about old jazz dudes? Coleman hunches on, barely inching one foot in front of the other, clambers on to his stool and wheezes something unintelligible into the microphone. Yet stick his white sax in his mouth, or a trumpet, or give him a violin, and it’s akin to pumping him with oxygen and shooting him with speed.

The concert was billed as “Reflections of The Shape of Jazz to Come” so I was expecting a good proportion of the set to be from that groundbreaking album of fifty years ago but Coleman, forever his own man, had different ideas. It was all enjoyable enough in a far out hipster jazz kinda way but as nifty as Coleman is you can’t expect him to be on the top of his game aged nearly 80. It did encourage me to delve deeper into his back catalogue though, so, job done. Patti Smith wandered on unannounced and rapped some crazy free form beat poetry on one number, and the Jajoukas came out for a lengthy jam on another.

Jajouka translates as “something good coming to you”, and it did. Never thought for one moment I'd ever get to see them. Next time - on their turf.
Posted by Monkey at 19:08