THE FLIPSIDE PRESENTS THE ART OF EXPLOITATION: ANTONY BALCH NIGHT 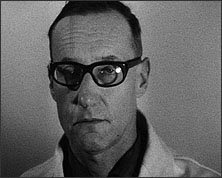 “If there’s one thing I hate, it’s the movies. Don’t even mention them to me”. It’s a Holden Caulfield line I regurgitate with tedious monotony but the chaps at Flipside are causing me to wobble. Their nights at the British Film Institute/National Film Theatre, specialising in unearthing oddities and obscurities (mainly from the 1960s) are rapidly turning into must-do events. This month “The Art of Exploitation: Antony Balch Night”, showed three films; two he directed and one he contributed filming to.

Balch is best known (to me at least) for his work with William Burroughs and a BFI restored print of Towers Open Fire (above), their eleven minute 1963 cinematic cut-up was shown first. Together they made as close an approximation of reading one of Bill’s more challenging books as you could get. It jumps about, it repeats itself, it layers one image on top of another, it jumbles sights and sounds, it blurs, it bleeds, and it leaves the viewer disorientated. Balch also distributed porn films and would show them in his cinemas along with his experimental Burroughs work as the opening feature. Quite what the dirty mac brigade turning up to see The Kinky Darlings made of Bill shooting up and Balch having a Barclays is anyone’s guess, but for Burroughs enthusiasts Towers Open Fire is an invaluable record covering the people, places, themes and activities central to his creative highpoint during the late 50s and early 60s.

The nearest Balch came to directing a “normal” film was Horror Hospital (1973) starring Robin Askwith as a struggling pop star who books in to a health farm to get straight. Only all is not as it seems. Cue clap of thunder and lightning reflecting off the twisted face of Dr Storm, the knuckle-clicking, wheelchair-bound, evil scientist played by Michael Gough. Ha, ha, haaa. Storm lobotomises his guests and any trying to escape are decapitated by a sword wielding Rolls Royce driven by a dwarf. You get the picture. The acting is thick ham, the script clunky, the plot thin, the budget tiny, and the special effects stretched to a couple of tins of crimson paint. Yep, great fun. More by accident than design it was laugh out loud funny.

The next Flipside is on Thursday 23rd July with the screening of Joanna a full-on swinging London picture from 1968. “Lovely Joanna, doe-eyed and Twiggy-esque in her groovy gear, descends on the Big Black Smoke to take an education in free love, shoplifting and art at the Royal College, her exploits soundtracked by the great Scott Walker song”. Director Mike Sarne will be there for a Q&A session. And finally, get yourself their DVDs: London In The Raw, Primitive London and The Bed Sitting Room, all highly recommended.