A TRIBUTE TO SKY SUNLIGHT SAXON 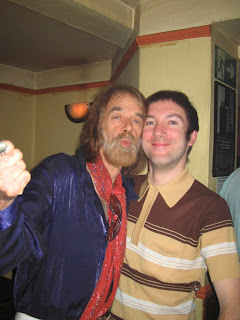 When most of your favourite music was made between 40 and 50 years ago you get acclimatised to seeing endless obituaries for artists that left their mark in hearts and record collections. Without wishing to sound disrespectful, most of these I treat with a shrug as they were getting on, they hadn’t made a decent record for decades, and I never even saw them in concert let alone met them personally.

But I’m genuinely saddened to hear the news today of the death of Seeds supremo, Sky Sunlight Saxon. It’s taken as read those Seeds records are bona-fide garage classics; Daryl Hooper’s organ and Saxon’s unmistakable vocals ensured they sounded like nobody else. But it’s that Saxon was still active recently, gigging and recording, that makes this particular passing all the harder to take. I saw him perform three times in the last six years and loved them all, particularly the first one at the Borderline in London, 2003. It was like he’d been living in a psychedelic cave since 1969 only to come out blinking into the harsh modern age to give an amazing performance of classic Seeds songs and new songs about spiders, aliens and fools on Capital Hill. Take a listen to “Seven Mystic Horsemen” from his 2005 LP Transparency for evidence he could still conjure the magic.

I also had the real pleasure and honour of chatting to him a few times and he was such a lovely, sweet, soft spoken man. He was on a totally different planet though, and trying to pin his brain down was like trying to make water run upstream; you just had to go with the flow and see where you’d end up. One moment of clarity did occur when I asked about the Seeds and said I thought they sounded so unique I couldn’t tell where their sound, his voice, come from? “I was trying to sound like Howlin’ Wolf with a piano”. I’ve always listened to them slightly differently since and he's right you know.

The last word belongs to Sky himself with a quote from March 2009 on his website: “I think you could retire when you die. I don't, however, believe in death, so I guess I will retire when I leave my body. But I plan to continue writing and performing in heaven”.
Posted by Monkey at 17:58