THE 13th FLOOR ELEVATORS - SIGN OF THE 3 EYED MEN 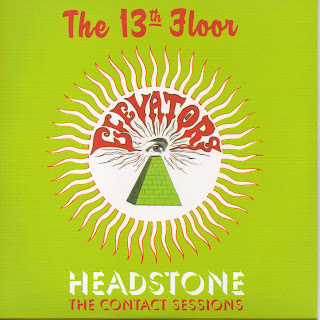 Years in the making and this week it hit the doormat with a reassuring thud. A 10-CD box set collecting everything you could ever want from Texan psychedelic evangelists, the 13th Floor Elevators. The classic albums, unreleased albums, demos, alternate versions, rehearsals, live concerts, the lot.

All the CDs (with individual card sleeves) are housed in an arm achingly heavy colour hardback book providing extensive recording details and crammed with photographs and every conceivable piece of Elevators memorabilia. There’s an envelope stuffed with reproductions of flyers, business cards, newspaper cuttings and photographs. And an LP sized box to keep it all. Not that you’ll be keeping the CDs in it for long because as stunning as the packaging is, it’s the music that’ll make you go out of your tiny third mind.

I’m taking my time in digesting all this lysergic lunacy so I’ve only had the first few CDs on repeat; and what treasures they are. A whole “lost” album, Headstone from February 1966 – six months before they recorded The Psychedelic Sounds of The 13th Floor Elevators – is solid garage brilliance. It may not be quite up to Psychedelic Sounds but it’s not far off and you wonder why it was shelved. Side one was supposedly “pop” and side two “psychedelic” but the Elevators idea of pop was to put a spell on Solomon Burke and the hex on Buddy Holly.

The recording quality of Live In Texas is patchy but sufficient to hear what a formidable force they were, locking into each other whilst “tripping on a mixture of LSD, marijuana, mescaline, amphetamines, Romilar D cough syrup and Listerine”. Teen dance hall etiquette dictated hits of day were placed among original material, so the Elevators set about pulverising “You Really Got Me”, “I Feel Good”, “Satisfaction” and the way they tear a new arse in “I’m Down” would have made Paul McCartney’s eyes water.

With only three released studio albums (the audio quality of those is pristine) there’s repetition in the songs and you’ll need a keen ear to spot the difference in some, but I could listen to “You’re Gonna Miss Me” all day long and still marvel at its menacing magnificence every time.

Sign Of The 3 Eyed Men isn’t cheap but looks good value and will save you buying anything else for the foreseeable future. They were the first band to term themselves psychedelic rock and they’re still the best.
Posted by Monkey at 14:24