FRENCH BOUTIK at the 100 CLUB, LONDON 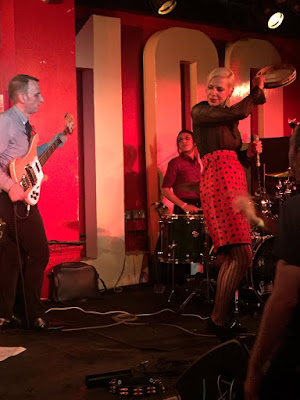 I like French Boutik. I like how the title of their album, Front Pop, references forward-thinking popular culture and the Front Populaire movement of the 1930s where an alliance of French workers fought for basic rights.  That combination of toe tapping melodies and socio-political comment informs their music, not that I can understand it as I don’t speak French but that’s not the point, is it comrades?

I like how French Boutik sing in French - it’s authentic and natural – rather than a second tongue, it strikes me as uncompromising and, frankly, the right thing to do, unlike so many others. Be yourself, be true.

I like that French Boutik are Mods and my sort of Mods. Mods who look good, dress well, know what’s what and don’t make me flinch from the term. They make Mod appear like a cool thing, which it always should but seldom does these days. They are the only current band I can think of who do Mod well. They aren’t a clichéd Mod band or, if you prefer, band of Mods.

I like how French Boutik’s music has undercurrents of soul and jazz but doesn’t actually sound like either. There’s a 60s grasp of strong melodies, elements of 70s new wave fleck their songs, as does 90s Britpop, and sandwiched between is a clean 80s sheen which, probably unintentionally but not unpleasantly, recall early Everything But The Girl, and Swing Out Sister (no bad thing at all, in case there’s any doubt, Kaleidoscope World is a splendid LP) plus the first couple of Style Council albums.

I like how French Boutik look happy on stage at the 100 Club, relishing the moment, and the way they shoot each other looks and smile knowingly when they’ve just nailed a part of a tune. I like how as a support act they make their set feel like the headline slot. People who’ve come specially to see them and those who’ve never heard of them before are in unison: they’re an enjoyable band. They drink red wine on stage.

I like how French Boutik are spilt along gender lines and have a girl on drums who hardly breaks into a sweat. Horses sweat, gentlemen perspire and ladies gently glow, as my Granpop always used to say.

I like that the vinyl edition of French Boutik’s LP comes with an inner sleeve with lyrics and even a double-sided colour poster. Posters are proper pop group material. It’s a proper pop record.

Front Pop by French Boutik is out now on LP and CD.
Posted by Monkey at 11:27