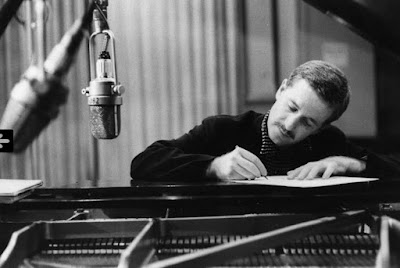 1.  Tommy Collins – ‘All Of The Monkeys Ain’t In The Zoo’ (1957)
No they’re not. There are cheating conmen and shysters all around, as ol’ Bakersfield boy Collins knew.

2.  Willie Bobo – ‘Fried Neckbones and Some Homefries’ (1966)
The Latin percussionist’s haunting yet rather beautiful and tasty groove.

3.  The Tages – ‘The Man You’ll Be Looking For’ (1966)
This Swedish beat combo open a new two-disc compilation Svenska Shakers: R&B Crunchers, Mod Grooves, Freakbeat and Psych-Pop from Sweden 1964-1968. At least three of those descriptions apply here.

4.  Tyner McCoy – ‘Four By Five’ (1967)
From The Real McCoy, the pianist’s first album after leaving John Coltrane’s quartet, this – fact fans – is played at around 280 beats per minute. I’ve not tried counting but can vouch this is pretty damn fast.

5.  Alice Coltrane – “Galaxy In Satchidananda” (1972)
Ms Coltrane’s brand of deep spiritualism as demonstrated on World Galaxy isn’t for everyone as I was reminded on Sunday morning when Mrs Monkey rose from her bed to enquire “What the fucking hell are you listening to?”

6.  Curtis Mayfield – ‘Pusherman (Alternate mix with horns)’ (1972)
I’m not fussed where folk buy their music, as long as they buy it, but was weird nipping into Sainsbury’s to buy their 2LP Special Edition orange vinyl edition of Superfly. Over double the original length with various additional versions, instrumental cuts, demos and radio spots it had to be done. This alternate mix with added strings and horns is the pick of the bunch.

7.  Mose Allison – ‘Your Mind Is On Vacation’ (1976)
“If silence was golden, you couldn’t raise a dime”. On 15 November, at the age of 89, and only four years after retiring, Mose fell silent. For a neat tribute and a top ten picks see my comrade Bill Luther’s Anorak Thing blog.

10.  William Bell – ‘Poison In The Well’ (2016)
William Bell’s second London visit of the year saw another superb performance, this time at the Barbican Centre, showcasing his latest Stax LP, This Is Where I Live, and a host of his soul classics. Shaking Bell’s hand and sharing a few words after the gig was an unexpected bonus and a magical experience. Legend.
Posted by Monkey at 19:56