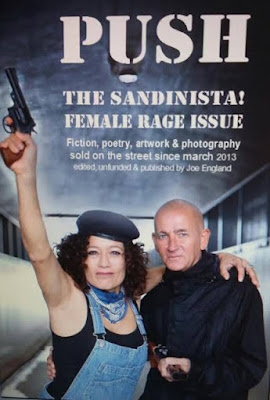 Back in 2013 I reported on the launch of a new underground literary fanzine, PUSH. Three and a half years, twenty-three issues, two Best Of PUSH books, the emergence of a raft of exciting writers, a host of literary events, and the giving away of cupboardfuls of nick-knacks and pop culture memorabilia during editor Joe England’s legendary raffles later, the mag is folding.

When PUSH appeared, it took its inspiration from the tiny independent press network, especially Blackheath Books, and since establishing itself as leaders in the field has paved the way for the likes of Paper & Ink and Hand Job to do a similar thing. None though, with respect, has had the bite of the England’s collections of prose, poetry and art.

Neither burning out or fading away, the final Sandinista! issue, is full of incandescent rage from an all-female cast. Some of the pieces make for extremely uncomfortable reading, and this from a series that has never shied away from confrontation or ugly truths. As Joe says, “I love this issue, and really cannot see where I could take the fanzine forwards from here.” I’ve huge respect for people leaving things at the top so credit to Joe, not only for collating a tremendous amount of work but for being a key conduit in bringing like-minded folk – writers and readers – together and giving them a platform. A push, if you will.

A third Best Of PUSH will appear soon, published, once again, by East London Press. The final issue of PUSH can be obtained from Joe here.
Posted by Monkey at 15:52