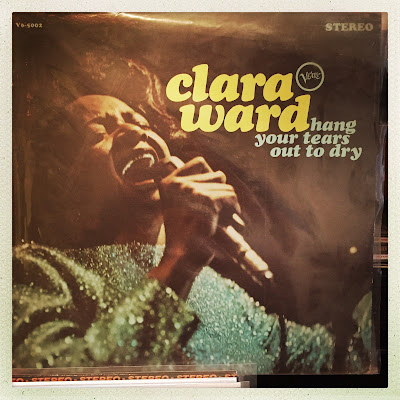 1.  Bobby Adams – ‘Sixteen Years In The Making’ (1963)
Bobby, with a voice like the man of the mountains, sings about his delight of girl’s 16th birthday; a girl he met at the age of two, then four, then eight. Enjoy this big beat mover then call the cops.

2.  Satan’s Breed – ‘Laugh Myself To The Grave’ (1966)
Give a group of Rhode Island kids a cheap organ, a few other instruments and some Animals records, lock them in the garage and wait for the results. Boom!

3.  The Deadly Ones – ‘It’s Monster Surfing Time’ (1964)
The title gives most of this track away. Taut and twangy instrumental with a few hungry monster noises over the top. Stay outta the water kids.

4.  Clara Ward – ‘Hang Your Tears Out To Dry’ (1966)
Primarily a gospel singer of the highest order, Clara rarely ventured into the secular side of the house but Hang Your Tears Out To Dry on Verve is a spectacular exception. A couple of standards, some full blown jazz-soul stompers, some folky-gospel and best-version-ever covers of ‘This Ole House’ and ‘Help’. Not easy to find but what an album.

5.  Betty Harris – ’12 Red Roses’ (1966)
From the new Soul Jazz Records collection, The Lost Queen of New Orleans Soul. Although Betty was only ever flown in to New Orleans for recordings, Allen Toussaint’s production and local musicians including the Meters give it that unmistakable gumbo-funk sound.

6.  Them – ‘What’s A Matter Baby’ (1967)
Them’s first post-Van Morrison LP, Now and Them, understandable lacks a bit of direction but the bouncy blue-eyed soul treatment on the Timi Yuro/Small Faces classic works here.

7.  Cilla Black – ‘Help Me Jesus’ (1973)
Now, I’m nothing if not a fair man and while I may usually prefer the sound of a burning zoo to a Cilla record I’ve got to admit liking this. Bittersweet Symphony intro, big sustained guitar chords, tickling piano and ace backing vocals all contribute to an out of the floor gospel soul dancer. If someone else had sung lead it’d be perfect, as it is it’s still pretty damn good. I’m off for a lie down in a dark room to recover from the shock. Nurse!

8.  Lloyd Cole & the Commotions – ‘Charlotte Street’ (1985)
Lloyd Cole at Islington’s Union Chapel this month was magnificent. Playing two sets – one solo and one accompanied by his son on second guitar – he treated the congregation to “the Lloyd Cole Songbook 1983-1996”. Lloyd’s voice was better than I’d ever appreciated, he was warm, funny, self-depreciating and armed with a stunning catalogue of songs from the Commotions period and the first phase of his (neglected by many) solo career. Rattlesnakes remains one of the finest albums ever made in my book, not a note or phrase wasted, so it was a thrill to hear three-quarters of it including a couple of my absolute favourites, ‘2CV’ and ‘Charlotte Street’.

9.  Hooton Tennis Club – ‘Katy-Anne Bellis’ (2016)
I flagged up their ‘Kathleen Sat On The Arm Of Her Favourite Chair’ last year and now off Big Box Of Chocolates comes another toe-tapping Scouse half-60s beat/half-90s indie winner.

10. French Boutik – ‘Le Mac’ (2016)
I’ve no idea what Paris-based French Boutik are singing about most of the time but I like the way they sing it and the cut of their jib. Debut LP Front Pop - bursting with bright melodies and a magpie approach to picking influences be it 60s, 70s, 80s or 90s – is highly recommended. ‘Le Mac’ rips along at a lick with careering guitars and hurtling organ in hot pursuit while singer Gabriela Giacoman is too cool to rush.