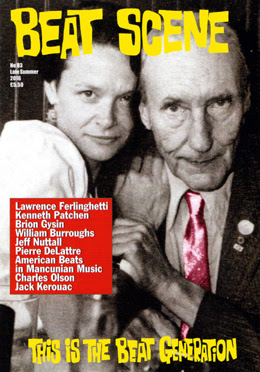 On the sleepy teatime quiz show Pointless last Friday one question was something like “Who in 1957 was author of characters Sal Paradise and Dean Moriarty?” Of a survey of one hundred people, two correctly identified Jack Kerouac. My immediate response was to deride the great British public for their lack of knowledge of On The Road, yet after some consideration every 50th person recognising the central characters of a 60 year old American novel was a decent result and those conducting the survey possibly struck lucky to hit that many.

Jack Kerouac naturally enough features in the latest issue of Beat Scene. The design might not have changed in over twenty years but neither has editor Kevin Ring’s passion for all things beat related as he draws together new articles, published transcripts and news and reviews of the latest happenings. I’m excited to read of the publication of Kerouac’s original unexpurgated text of Maggie Cassidy and the article by Kurt Hemmer identifying the Beat Generation’s influence on Morrissey threw up a number of interesting associations. How have I never seen that photo of James Dean up a tree before?

Available from www.beatscene.net/ priced £5.50 or via subscription.
Posted by Monkey at 18:04