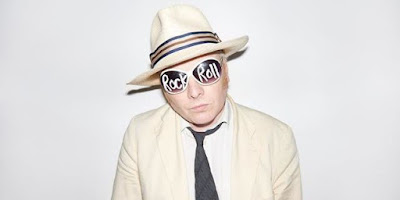 Should Luke Haines ever appear on one of those game or reality shows – and I’d dearly love to see him on I’m A Celebrity Get Me Out Of Here covering in rat shit fetching firewood with Una Stubbs – he’d be introduced as “Best known as lead singer of 90s indie band The Auteurs and member of Black Box Recorder who had a hit in 2000 with The Facts of Life”. For me though Haines is the author of two fabulously bitchy autobiographical books, Bad Vibes: Britpop and My Part in its Downfall and Post Everything, both of which I read earlier this year and was instantly a fan after having never taken much notice of his work. Haines possesses a well-developed skill in tearing to shreds anyone who crosses his path and a fondness for occupying the position of perennial outsider with an enormous sense of righteousness. Written from the viewpoint of the time with no attempt to balance with hindsight or maturity, both books are funny as fuck. You need to read them, not least for the Glenn Hoddle lolly stick episode...

I remembered The Auteurs – I saw them support Suede at the 100 Club in the early days of both bands – but not any of their music so it was with trepidation and some reluctance I finally approached them. Haines talks such a good game I didn’t want to spoil his version of events. How much stuff from the mid-90s is going to sound great to fresh ears this late in the game? The Auteurs did. Almost the classic albums he claimed, certainly the first three and the fourth isn’t bad at all. Lacerating rock and roll, sharply penned, unusual subject matter. And what with Haines being an obnoxious shit-stirrer with self-destructive tendencies I don’t know why I missed out on them.  A combination, more than likely, of bad clothes, worse hair, a punchable face and the band not looking in any shape or form like a gang. Bad crime that. They were no Spitfire, man. Oh, and one of them played the cello for Christsakes. I, like almost everyone else, backed the Suede horse. It was one thing to merrily mince around the indie-disco shaking all your money in time, quite another to rejoice in an unsolved child murder or a light aircraft on fire.

Last Friday, Haines’ new album, Smash The System, was released. On Saturday, following a talk back in the summer at the Walthamstow Rock & Roll Book Club, he returned to the ‘Stow to promote it. Not that he mentioned it nor were there any copies to be bought. No hard sell here. Strolling on to the low stage, glass of red wine in hand, he sat on a stool, picked up an acoustic guitar, played songs, cracked gags and wore, quite literally, a pair of Rock ‘n’ Roll shades. “Rock” in white paint on the right lens, “Roll” on the left. Looked good but impossible to see shit through so donated to one quick-handed punter after the first song, the album’s rolling title track, which urged us to smash the system, listen to the Velvet Underground and expressed admiration for the Monkees. “Davy Jones sings… Peter Tork sings… Mickey Dolenz sings…” Poor old Mike Nesmith left off the list for treating the Monkees too seriously. “Imagine being in the Monkees and not understanding the Monkees”. This light-hearted knockabout routine become a frequent occurrence.

‘Ritual Magick’ was a macabre tale of putting menstrual blood on the roses to make the garden grow (unusual song themes, remember?) and the odd folksy theme continued with ‘The Incredible String Band’, a kazoo accompanied ditty about “an unholy act, they sang like a couple of weasels trapped in a sack” which made me chuckle as that’s precisely why I find those Scottish folkniks unlistenable. Haines though, the contrary sod, “loved them”. ‘Bomber Jacket’ a creepily evocative account of being outside growing up in the late 70s straddled comedy and menace as did ‘Are You Mad?’ also referencing that period (or early 80s) with references to Eric Bristow and Bobby George.

Outside the new record there were some Auteurs songs including ‘Child Brides’, ‘New French Girlfriend’, ‘Lenny Valentino’ and ‘Show Girl’ and although I can’t profess to yet being fully up to speed on all the solo albums Haines knocks out seemingly cheaply from his front room (I’m trying), ‘Lou Reed, Lou Reed’ and ‘Leeds United’ were instantly recognisable as were two tracks from his concept album about 70s wrestlers: ‘Haystack’s In Heaven (Parts 1-3)’ “Shirley Crabtree in heaven, Les Kellett in heaven, Pat Roach in heaven, Dickie Davies in heaven, grapple fans in heaven, all the old ladies in heaven…” and ‘Saturday Afternoon’ with Haines masterful at blending innocence with the darkest horribleness, entertainment with terror. His half-spoken, breathy husk make a “liver sausage” sound like the most terrifying object on earth. His sinister delivery akin to a hostage taker ringing up and giving directions where to drop the money before your loved one chokes to death on a meat based sandwich.

Luke Haines likes to give the impression of a scary man (see his Twitter feed) and he can rub people up the wrong way (I was talking to a couple of NME journalists from the 90s recently and the air would've made a sailor blush when his name came up) but isn’t that what rock and roll is supposed to be about? Smash the system, listen to the Velvet Underground, reflect on our pop-culture heritage, wind people up and, most of all, have fun. Luke Haines is a lot of fun. Sorry Luke.

Smash The System by Luke Haines is out now on Cherry Red Records.
Bad Vibes and Post Everything are published by Windmill.
Posted by Monkey at 11:31