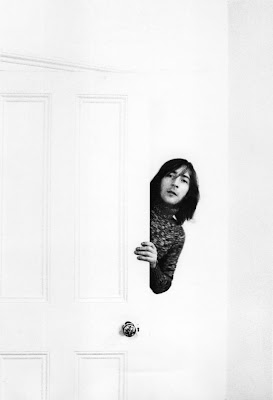 Reggie King is the gift who keeps on giving. Whenever it seems everything has been seen or heard, something new crops up, like these two never released recordings he made in 1970 with BB Blunder for Brian Matthew’s Top of The Pops show on BBC Radio 1. Huge thanks to Pete Bonner (psychotron9) for posting them on YouTube.

BB Blunder was formed in 1970 from the ashes of the Blossom Toes - who made two albums We Are Ever So Clean (1967) and If Only For A Moment (1969) - and consisted of ex-Blossies Brian Godding (guitar), Brian Belshaw (bass) and Kevin Westlake (drums). Blunder would release one album, Workers’ Playtime, in 1971 and worked around the same time with Reggie as he pieced together his Reg King album using a mixture of them and his old Action colleagues to make the record. When BB Blunder began to play gigs Reggie was drafted in and for a short time was part of their set-up.

The YouTube clips date these BBC sessions as 1970 and Brian Matthew said they formed part of the band’s live act. For that reason I’m inclined to believe they were more likely from 1971 but I’m happy to be corrected if anyone can confirm the transmission date. The soulful "You Go Have Yourself A Good Time” was one of Reggie’s best songs on his album, albeit in a slightly different form and using Mighty Baby rather than BB Blunder, whilst the heavy rocker “Sticky Living” was written by Brian Godding and was the opening track - with added horns - on Workers’ Playtime (which only featured an inaudible Reg on one song, “New Day”).

In 2005 when working on the liner notes for the Circle Records reissue of Reg King I spent an enjoyable Sunday afternoon at Brian Godding’s house chatting about his time with Reggie. I'd previously sent him a few questions to start things off and this is what Brian wrote back about that period.

Can you remember when and where you first met Reggie and what your first impressions of him were?
I first met Reg in the late 60's when he was with the Action, I didn't get to know him personally then but was very impressed with the band and of course his voice and vocal style, great phrasing and feel coupled with superb pitch control.

Can you give some idea how you started working together?
We stared to get to know each other and think about working together with the advent of the Sahara music venture (1970?) Us with the BB Blunder project and Reg being given the opportunity to make his first solo album. BB Blunder basically started by helping him - along with the guys from The Action - to demo his material.

How did Reg end up joining BB Blunder and what material were you doing: his own songs or yours?
Reg did sort of join Blunder, or you could say we sort of joined him! It was a short lived collaboration (1970-71) and the loose idea was promote his music and ours so the material was a mixture plus some things we wrote together. It seemed to me, at the time, a good idea as I wanted to concentrate on the guitar and Reg was a bloody sight better singer than I was.

BB Blunder backed Reggie on some of the tracks on Reg King and The Action/Mighty Baby did the others. Was there any real reason for this or just who was available at the time?
Reg had been given total control over the making of his album by Peter Swales from Sahara which was not really a good idea in retrospect. There was a good deal of confusion as to who was doing what and when so it ended up as a bit of a barmy cooperative with Reg doing rather a lot of versions of his songs with a lot of different musicians and costing Sahara a bloody fortune in the process.

What was Reg like to work?  Was he open to suggestions or did he have a firm idea how the songs should sound?
Reg was great fun generally to work with but at the time, totally disorganized and a bit prone to the drink and other things so we did waste a lot of time (and more importantly, money) in the studio. It was really easy to lose the plot. But in fairness, most people at that time were recording in this loose and spontaneous way but they had rather larger budgets than us. I think in the case of the Reggie album it would have benefited greatly with a George Martin type producer slamming down the iron fist of reason in large doses.

What were the expectations for Reggie’s LP?  Did he think he'd break through with it?
I don't personally know what the expectations of the finished album were by either Reg or Sahara at the time as we BB Blunder were more tied up with Worker’s Playtime and replacing Kevin Westlake on drums who'd had enough. I think that by the time the album was going to press, Reg had lost the plot in a big way and Sahara was effectively bankrupt. To me, the great thing about Reg and his music was the obvious potential and the sad thing is it was never quite realised.

What do you recall of Peter Swales and Sahara Records?
I recall a great deal about Peter, the company and this period of time. Peter (who was an old friend of Kevin Westlake from his home town of Haverford West in North Wales) was working in PR in the Rolling Stones organisation. Peter really wanted to start a company to help us lot and various other artists to carry on making records so he managed to blag a substantial amount of money from the Stones to fund Sahara. An extremely bright and energetic guy who gave it his best shot.

“Little Boy”/“10000 Miles” was released as a single and credited to Reg King & BB Blunder.  What did you think of it?  Did it receive any attention?
These are probably my favourite and most finished/ accomplished cuts from the bunch. I like them but cannot remember what attention they may have received at the time but there was little or no money left for promotion of anything. We weren't directly involved with the promotion of Reg's album but we did play most of the songs in one way or another during the short space in time we worked together.

What are your favourite memories of working with Reg?
As I've already said, I always believed that Reg was potentially up there with the likes of Rod Stewart, Lennon, McCartney etc  as a singer and was definitely at his best in the Action days (kept in his place by Bam, Mike and Roger). I remember him with a lot of affection as he was an extremely funny guy who was sadly losing it by the time we were working together. I remember one moment during a gig at the Country Club in London when during one of my guitar solos a whirring sound started up from the side of the stage - Reg had found a hover and proceeded to hoover all the dog ends up for the next ten minutes. Happy days!

On your website, Lotsawatts you mention Reggie going “into the local nuthouse”.  Can you explain this a bit further?
Reg was basically heading for a nervous breakdown and it's not for me to speculate as to the whys and wherefores but I’m sure drink and drugs played a big part in this process. As I've said Reg was always really outgoing and generally a lot of fun to be with but he was in retrospect clearly hiding a lot of serious personal problems which would end up in him having to receive a prolonged period of mental care and supervision which was very, very sad. A huge talent nearly but not totally wasted.
How and when did you lose touch with Reg?
In the years after his breakdown Reg was, I believe, under close supervision  and moved out of London but I did hear from him about a year ago when the Action reformed. I really wish him well.

Don't forget Reggie King's Looking For A Dream LP/CD is out now as well as Ian Hebditch and Jane Shepherd's beautiful book The Action: In The Lap of the Mods. I can't recommend either of these highly enough.
Posted by Monkey at 09:17