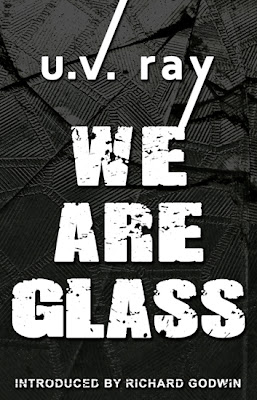 In a crowd of pretenders adopting the pose of outsider-chic, u.v. ray is the real deal. Published across the tracks from the literary chattering classes for 20 years, his new book We Are Glass features seventeen short stories that demand attention; grabbing the balls and nailing them to the nearest bar stool. u.v. ray picks up the baton for the underdog, the junky, the freak, the weirdo and the whore, forcing the reader to glimpse the unforgiving brutality of life through their fingers. It’s a bruising encounter yet it flickers with compassion and is the best short story collection I’ve read since Dan Fante’s Corksucker back in 2005.

Who are you? Explain yourself.
Take away the writing and I don’t know who I am. Without the writing I have no identity.  The rest of my life exists only in the background to my writing. I don’t believe I will live a long life because soon I won’t have anything left to give the world. And I think people fade away when they don’t have anything left to give. I never felt part of anything. I have always lived in emotional and psychological isolation. It seems natural that neither am I part of any literary clique. I stand apart from them. I have no desire for literary camaraderie or to amass awards. My work is an act of suicide, as if I have written it in my own blood. It is born of the scars I have amassed in life. And I have scars all over me.

But I have changed my views vastly over the last couple of years. I consider myself a pacifist these days. I do not advocate violence. Live and let live, that’s what I say. There is only one thorn in my flesh. John Cooper Clarke. He’s not a punk poet; he’s the Cliff Richard of the poetry world and if he comes near me I’ll break every one of his fingers.

What is We Are Glass?
We Are Glass essentially explores alienation and neurosis in the lives of people living in the city. I don’t hold with this bullshit that a story should have a beginning, middle and an end – all tied up neatly with a bow. At least not in the contrived, conventional sense. I have no time for that sort of contrived, two-dimensional fiction.

Fuck those post-modernist airy-fairy literary types with their PHDs. Most of them know all there is to know about technique; and they harp on about form and contrast all the time – but they can’t write for shit. More now than ever we need writers willing to take matters back into their own hands. Right now is where we create our own history. For how long are people willing to sit back and let these pretentious ponces – those I refer to as the Frilly Knickers Brigade - peddle their crapola in the literary market place? We don’t need creative writing tutors. I award myself the title of Dr. I do not believe in being a lily-livered, panty-waisted pussy. I do not seek their approval or camaraderie. I exhale whisky fumes and write fast and write hard. All the way through. Hammer the bastard into submission with scant regard for plot or reason. That is my method.

Everything is too sanitised now. It’s a symptom of society. And writers, once the last bastion of rebellion, have followed like little lapdogs. I think governments and corporations are close to victory, it is the rout of civilisation as I understand it. All passion and creativity is being stamped out in their vituperative pursuit of a socially engineered populace. These days people are happy to look to corporations and buy their identities off the peg. Such is the reason for the title of the story in We Are Glass – Where Are the Assassins? I am not really referring to killers; I am talking about those who assassinate mediocre thought. There can be no profit in aligning one’s self with a society that has become clinical and soulless. The stories aren’t just dark, they are as black as black. I’m not pretending to be something. My work is a direct result of my inability to find acceptance amongst humanity. And this is not to make myself appear interesting to others. I have experienced alienation to the point that it is painful, I have therefore retreated into my own work. All I’ve done is turn that alienation into characters in stories. Author Richard Godwin called We Are Glass: A dark, suggestive rebellion, a challenge to the status quo. That is what I hope We Are Glass is.

Kids growing up wanting to be footballers or pop stars, not writers. What went wrong?
Well, there is nothing wrong with wanting to be a footballer. Football is modern theatre for the working classes. The emotion involved for fans is unbelievable. I have nothing against that. I’d love it. As I have said many times, if I were a footballer my goal celebration would be to run up and stand before the opposing fans, thrusting my crotch at them in a sexual manner with my tongue hanging out.

Pop stars gyrate suggestively, nigh on naked, for the entertainment of screaming thirteen year olds. Let’s not fucking go there.

How'd you rate your chances against Henry Chinaski in a fight?
If I got him on an empty stomach I would be in with a chance. But if he’d eaten a sandwich... that might be a different kettle of fish.

What happened to The Queen Mother Slags? I'd like to see them. Reckon they might reform?
The drummer, Guss – aka Mister Magoo – popped his clogs of a drugs overdose. The band never really got off the ground in the first place and there was no future for us after that. But that’s ok because you know what? I have no ambitions to do anything at all. I spent a good two decades in a drug and alcohol induced haze and I’m proud of it.

We Are Glass by u.v. ray is published by Murder Slim Press and available here.

u.v. ray is also featured in the issue two of PUSH litzine alongside Joe England, Joseph Ridgwell, Michael Keenaghan and others. For further details try Joe England Books.
Posted by Monkey at 17:04