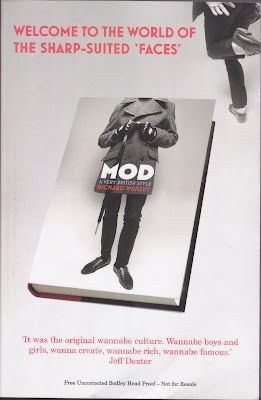 Richard Weight’s new book, Mod: A Very British Style, has received plenty of reviews in the national press over the last few weeks but only one from within the Mod Scene: a critical piece by Paul Hooper-Keeley on his Modernist Society blog - also posted on Amazon with one star - which garnered a chorus of approving comments from those vowing not to read the book and stopping just short of a book burning session on Brighton beach. I hadn’t planned to comment but after a prompt on the Modculture forum for a second opinion, here it is.

The first thing to say is Mod: A Very British Style is not directly about the Mod Scene, so the events, bands, people, politics and intricacies of what could be called the core Mod Scene are of little interest here and largely ignored. What Weight’s book is, is an exploration into how the original Mod movement drew their influences from American, European and Afro-American styles in music, art, fashion, architecture and design and how those strands have been absorbed into the British mainstream. It examines attitudes towards class, consumerism, race, sexuality and countless other topics. It is a story of how a cult became a culture.

That the author is unknown within Mod circles and has spent more time studying history at Trinity College than off his nut in R&B clubs or drunk at scooter rally dos has drawn a few Get Orf My Land comments but it’s refreshing for Mod to be viewed with a more critical and dispassionate eye.

In the introduction he writes he “may offend purists seeking a book that illustrates and reaffirms the strict codes they adhere to”. This is not a How-To guide. Those looking to discover the preferred colour of watch straps worn at the Scene Club, the best place in London to buy purple hearts, and which Smokey Robinson & The Miracles single got the best dancefloor reaction will be disappointed. I’m hopeful Paul “Smiler” Anderson’s forthcoming Mods - The New Religion will answer important questions like these.

Weight is a historian looking to place Mod in a historical and sociological context, so his book more closely resembles the exhaustive academic style of Dominic Sandbrook’s White Heat than the quick snap of Richard Barnes’s Mods!  It is therefore written in a fashion I found heavy going, especially the introduction when I had to reach for the dictionary after reading “simulacrum” for the second time. Four hundred pages of text densely packed with facts, figures, quotations and statistics doesn’t make for an easy flowing narrative.

Part One deals with the original development of Mod and how as its profile grew during the 1960s the mainstream both unconsciously and, from a marketing perspective, cynically tagged everything even vaguely new, hip and happening as Mod. It is that quest for newness, for modernity, which Weight seeks and which, for him, is at the core of Mod. The problem is how to differentiate Mod from simply mod(ern), and this is what makes his task difficult and ties the book in a tangle, unwittingly dragging the reader in to play the old Mod/Not Mod game.

In Part Two, the parent Mod spawns an array of children which adopted, through accident or design, some of its characteristics. On some, the heritage is obvious: suedeheads, northern soulers, the Mod revival kids, Acid Jazzers and Brit-Poppers; whilst on others, glam rockers, punks, casuals, ravers it isn’t. All these secondary subcultures and more are explored and to those of us who have been around the block a few times there isn’t much new of significance but to an outsider with little previous knowledge Weight provides a comprehensive introduction.

That Mod is firmly entrenched within the very fabric of Britain can be spotted every day but on occasions, for example the section on techno - “the last British youth culture of the 20th century to be shaped by Mod’s European outlook” - the links and parallels Weight draws to Mod are tenuous and stretch the bounds of credibility. He even tries to link the UK riots of 2011 to Mods as their “narcissistic obsession with style had created the consumer society”. Pete Meaden, I hereby hold you responsible for the looting of Footlocker.

I have little doubt Weight expected some hostility from within the Mod ranks as he lands a few pre-emptive digs to the more stubbornly conservative areas of Mod that are still weighed down with nostalgia. For example he calls the Mod Revival of 1979-82 “one of the oddest episodes in the history of British youth culture… they demonstrated how thin the wall was between a subculture being imaginatively reconfigured for a contemporary audience, and one that was merely being copied as an escape from the present”. I didn’t give it much thought as a fledging young Mod but I’ll side with Weight here, it was a retrogressive step out of keeping with Mod’s original progressive path.

Mod appealed to me precisely as a form of rejection and exclusion from the 1980s. Everything in the 1960s seemed infinitely cooler than the world around me so the more accurately that period could be recreated the better. I was a young kid out enjoying myself, I didn’t give a hoot whether I was doing anything new from a cultural perspective; it was fresh to me and it was bloody exciting.

But a host of rules were in place about what could be worn, what could be listened to, that eventually it became stifling and restrictive. Those with a bit about them built upon it and used it as a catalyst to open up a whole range of interests that on the face of it aren’t Mod but can be followed through the family tree back to the parent. For the others, well, you still see them knocking around, presumably happy to be stuck where they are and they get short thrift from Weight who threads this theme throughout.

As others have already pointed out, there are inaccuracies. Some are repeated falsehoods (“Zoot Suit” by the High Numbers being based on The Showmen’s “Country Fool” always drives me mad) and some are sloppy errors but the breadth of research and associations are so extensive a few slips here and there are almost inevitable. Let he who is without sin cast the first reference to Mod being about attention to detail. In fact, one of the problems here is there is too much irrelevant detail which makes it seem fussy and show-offish rather than neat and understated. Each page a competition to see how many disparate references can be sewn together.

Mod: A Very British Style has its faults but it is not without merit. Mod has long warranted a serious and intelligent study and this is one. Richard Weight should be commended for undertaking an ambitious project rather than taking the easy option in putting out another embarrassing This Is A Lambretta, This Is A Fred Perry book we see knocking around which only cements the perception of Mods as a bunch of immoveable cultural retards rather than the forward thinking individuals he believes they were, and should be.

Mod: A Very British Style by Richard Weight is published by Bodley Head, priced £25. This review was written for, and first appeared at, Modculture on Friday 11 April 2013.
Posted by Monkey at 10:32