LETTER FROM THE ACTION’S REGGIE KING: “I REALLY DID DISCOVER JIMI HENDRIX” 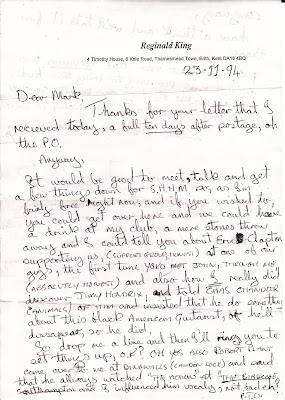 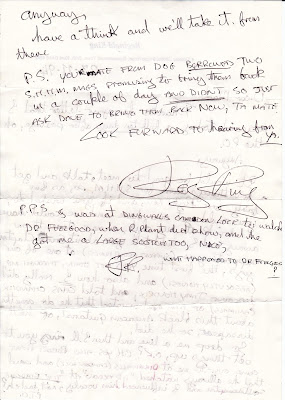 After years of being so far off the radar that many people believed he’d died, The Action’s Reggie King was spotted in 1994 by a member of the band Dog in their local pub. They told omnipresent mod about town Dave Edwards (who now writes the Aggravation Place blog) who phoned me with news of this mind blowing discovery. The process of then trying to interview Reggie for my Action-titled fanzine, Something Has Hit Me, began. Reggie didn’t own a telephone so the approach and arrangements were conducted by letter, which was slight pain at the time but now I’m thankful as I received two name dropping letters from him, the first shared here (I can’t find the other at the moment). If you click on the pages they should become readable.

It’s a revealing little insight into "Reginald King" and even these few words captures his personality well. When I finally got to visit him at his flat we spent an hour and a half chatting before he was itching to get to the pub across the road. He was good value and I'm still pleased with how the interview turned out  (here if you've not read it before), although we didn’t discuss his claim to have discovered Jimi Hendrix.

It’s a terrible shame Reggie isn’t here today as he’d be chuffed with how the recent collection of his unreleased recordings Looking For A Dream has been received to universal acclaim. If you’ve not yet got it, do so.
Posted by Monkey at 10:02