THE NEW WORD ON THE STREET: PUSH – ISSUE ONE 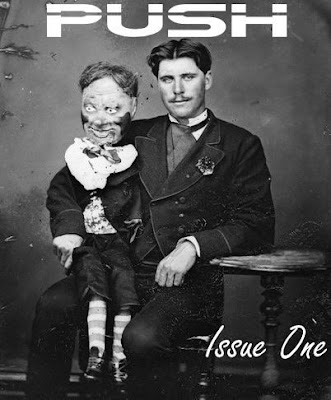 New literary fanzine PUSH might better be called KICK or WHACK such is the impact of its writing. Across 42 simply presented pages it features previously unknown writers like Jeff North, Carlton Burns, Ian Scanlon and some character Dirty Boozy Bastard, alongside names familiar to followers of the underground lit scene: Joseph Ridgwell, Michael Kennaghan, That Petrol Emotion’s Raymond Gorman and editor Joe England.

Sold at a giveaway price of £1.50 on the streets, outside football grounds and at gigs, the uncompromising prose isn’t for the faint hearted. Amalgamating pop culture, drug paranoia, rushed sex, football hooligans, and the threat of violence, it is just one glance away from a character in a John King novel. In the way football matches offer a valve to release pressure and tension, these writers hammer their words. By way of balance, the poems offer quieter contemplation and snatches of respite from the onslaught of tough fiction. I asked Joe England about his inspiration for launching a new mag.

“I suppose PUSH had its origins for me when I recently discovered the wonderful world of the small press, firstly through Blackheath Books which I found out about through back-reading Monkey Picks, and then other doors opened up courtesy of Joseph Ridgwell. I love the whole approach of the small press, the limited print runs and the amazing quality in look and writing. I have a great appreciation of online litzine’s like Melissa Mann’s Beat The Dust, but online/e-reading just isn’t the same as holding a publication in your hands. Same reason why the experience of vinyl still cannot be beaten. What kicked this in motion was four weeks ago when I managed to get my hands on an issue of Kevin Williamson’s Rebel Inc. mag from 1993 and in an email conversation I mentioned to Joseph Ridgwell how the world needs a street lit fanzine right now as much as it did back then. ‘Do one then’, he said and within three weeks I was selling PUSH on the street and posting it to various parts of England, Ireland, Scotland, Sweden and Germany. At a football match the other week, witnessing a complete stranger engrossed in issue one was mind-blowing. If the same chap was reading a PDF file of PUSH on a Kindle the impact would have been soul-burning.”

Such is England’s rush of enthusiasm that issue two is already nearing completion. These things tend to succeed or fail on the strength of their editor. Despite making his name and being championed by the small press, Charles Bukowski constantly bitched against them in his letters, claiming they only lasted a couple of decent issues until editors lost their bite and accepted poor quality submissions from their mates or famous poets (even himself). If PUSH can keep the standard of its first issue (Keenaghan’s “Bent” is worth the cover price alone) there’ll be no complaints here and besides, it’s a heck of a lot better than reading the excuses from Sam Allardyce or Harry Redknapp in the match day programme.