BLUE ORCHIDS at THE SOCIAL 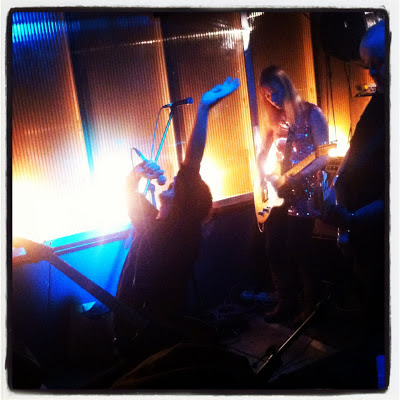 This is Martin Bramah of the Blue Orchids falling to his knees at the Heavenly Social. I’ll be honest with you, I’d never paid much attention to them until Idle Fret booked them but I always study their bills with interest so looked them up and wonder now how they'd eluded me.

As a founder member of The Fall Bramah quit after their 1979 debut Live At The Witch Trials and took keyboardist Una Baines with him to form the Blue Orchids. They cut some singles for Rough Trade and later released The Greatest Hit (Money Mountain) in 1982 and Bramah has intermittently used the name since.

I’m no expert on The Fall (owning only three of their 237 albums) but doubtless aficionados debate who originated The Fall/Blue Orchids sound. To the untrained ear they are, at very least, separated at birth with their off-kilter organ, simple guitar lines and vocal delivery. If you like one you’ll like the other. Also the penny dropped about the Comet Gain song “Yoona Baines” and how much their Howl Of The Lonely Crowd (2011) owes to the Orchids.

On Tuesday they put on an engaging set centred on those early tracks ("The Flood", "Work", "Bad Education", "Hanging Man" etc). It was apparent how no band could contain both Martin Bramah and Mark E. Smith. The longer they played, the more animated and chaotic Bramah became; at one point he tried to sing into his microphone stand even though the mic was in his other hand and there was plenty of half-cut stumbling and fumbling around and banter with the crowd. “I’m from up north,” he said, and as if to accentuate his northerness, kept removing and putting on again a terrible flat cap with annoying frequency.  “Manchester isn’t up north,” he continued, “it’s in the Midlands, but don’t tell them I said that,” touching his nose.

I’ve previously discussed the merits - or otherwise - of bands reforming but this one joined up some musical dots and rather than playing only to original fans the Blue Orchids cultivated new ones, of which I’m the latest.
Posted by Monkey at 09:28