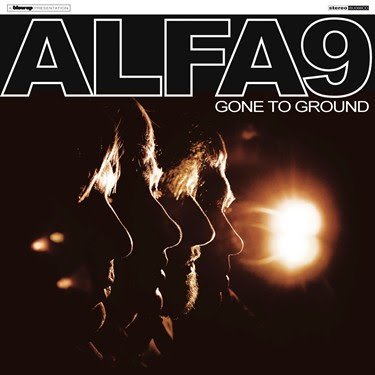 To describe something as a toe-tapper sounds like damning it with faint praise but it’s not, it’s an involuntary and welcome reaction, and one that doesn’t happen as often as one would wish. Listening to “Green Grass Grows”, “Petty Lies” and “Into The Light” on Alfa 9’s Gone To Ground  without tapping your toes ranks alongside putting a Fruit Pastel in your mouth without chewing.

That trio of songs immediately leap out but Gone To Ground is filled with solid, tightly composed and sharply produced songs, the likes of which people aren’t supposed to write anymore. Broadly West Coast folk-pop in spirit there’s an unfashionable classicism about them. There’s nothing wildly inventive or original but that’s no bad thing here, sometimes there’s nothing better than a dozen warm tunes to make you feel a whole lot better. There’s a good variety too yet it all hangs together snugly: from those aforementioned pop janglers; to the Californian dreaming of the title track and “Nothing Feels”; the Crawdaddy blues wailin’ of “Old Man Blues”; and the sparkly stomp of “Mad Song”. They all sound like the band are having a whale of a time and exchanging little sideways nods and smiles as they play. However tempting it might be to throw in a seven minute psychedelic jam that’s something they thankfully avoid, keeping the album from drifting from its tight focus. With seven years since their previous album Alfa 9 have had plenty of time to hone these songs to perfection.

I’ve played this about 20 times over the last few weeks without the need to skip any tracks although some of the rhymes on the Oasis-do-Tomorrow-Never-Knows “The Castle” would make even Noel Gallagher blush. A very fine album.
Gone To Ground by Alfa 9 is released by Blow Up Records on 11 March 2013.
Posted by Monkey at 15:28