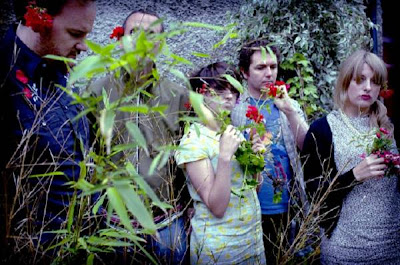 When was the last time you were upset a band spilt? It’s not something that happens often but then bands don’t announce they’re splitting these days, they just fade into inactivity. Shrag spilt on Friday 15th March 2013 after playing their pre-announced farewell gig at the Lexington. I’m a bit upset about this. Not because we have a long history, more that we don’t. We only met in October but I soon became mildly obsessed: buying all three albums and seeing them live the same amount of times.

Their third album, Canines, was one of last year’s very best. I’ve not gone more than a few days without playing it – in its entirety – and it gets better every time. It’s not easy to pigeon hole and it’s not especially immediate but it gets under the skin. This, for an album with so many anatomical references, is pretty apt. I’m pleased I heard their albums in reverse order as, unusually, they improved with each one, each a progression on the last. The first Shrag, a hit-and-miss collection of singles and B-sides isn't entirely serious and not dissimilar in places to a bit of a rubbishy version of Art Brut; the second Life! Death! Prizes! is excellent, no longer played for laughs and full of incessant sharp punk-pop hooks; and finally Canines which is almost unique in how it is more rounded, mature, accomplished, polished, intelligent – words which usually indicate a band has lost everything that made them enjoyable in the first place – yet an album which if they’d carried on for another ten years wouldn’t have improved upon.

They played nearly all of Canines during the gig including a couple with a string section. Well, a violin and cello, plus a few from the others including what they refer to as their hit, “Mark E. Smith”. They wondered who’d be the first to cry. My money was on singer Helen, but then she looks like she’s about the cry most of the time. I’m told to “Cheer up mate, it might never happen” by people in the street with annoying frequency. I’m not a miserable git but my face’s default position must imply otherwise. Poor Helen must get abuse every time she steps out her front door, possessing - even when smiling - the mardiest, turn-the-milk-sour face in (un)popular music. She also can’t really sing but she marched on the spot, tugged her dress like a petulant child, stamped her foot, shouted, screeched, talk-sung and tried to get the audience to remove their clothes. She’s bloody brilliant. When Bob and Steph join in on songs with a circular rhythm like “Tears of a Landlord” they’re like an unruly classroom singing “Frère Jacques” in rounds.

Quite why they’re amicably disbanding after ten years is a question for them but not everyone can summon the enthusiasm to be in a band for so long only to play gigs to a handful of people each time (this gig was sold out). Not a concern for fellow Brightonians Comet Gain who’ve stayed under the musical radar for much their 20 year existence. As special guests on the night they asked how long Shrag had been together. “Ten years? Pah! Bunch of kids,” said David Feck before adding they wouldn’t split until outlasting The Fall. When Shrag left the stage a message from Mark Riley was broadcast. “Stop pissing about with all this splitting up nonsense. We all know you’re too good to spilt up”. They came back and did - as they had to do - the ludicrously infectious “Rabbit Kids”, a song that has kept me awake at night more than once as a particularly stubborn earworm. Emotions were running high as the realisation this was finally the end sunk in. It took three attempts to get it right before all ending in a heap on the stage bashing out notes with none of them wanting to quit.

But quit they have. They’ve done their bit. So, for now, that’s it. One day folk might cotton on to what they’ve missed - I almost missed them - and they’ll be a (more popular) cult band. When I get to curate the Meltdown Festival I’m gonna put Shrag on at the Royal Festival Hall and they’ll return, triumphant. See you there.
Posted by Monkey at 18:16