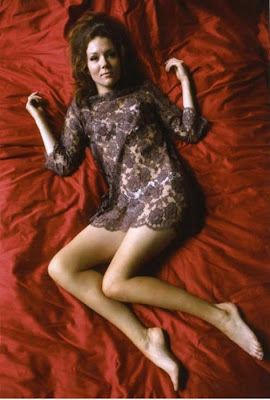 Here's a treat for fans of Diana Rigg - her rarely seen outing in Minikillers. The quality isn’t great but then the version officially released on the bonus DVD disc of The Avengers Complete 50th Anniversary Collection isn’t much better. Minikillers was filmed on the Costa Brava on what looks like a home video camera and follows Diana through four seven minute episodes where she is caught up in a ridiculous Avengersesque plot involving remote control toy dolls that spray lethal liquid into the eyes of their victims, carry bombs in E-Type Jags, and conceal shipments of heroin. In each episode she manages to fight a group of baddies led by a shady geezer with a moustache and a Telly Savalas lookalike. There’s no dialogue just a funky jazz soundtrack which breaks from Avengers background music into freeform jazz into snatches of Laurel and Hardy. I’ve no idea where Minikillers was broadcast (if at all) or why she worked on such a low budget project (if she went for a holiday she was unlucky with the cloudy weather) but Diana is obviously still playing her part as Emma Peel and looks absolutely stunning in a series of bikinis and miniskirts (including the one above) which is reason enough to watch it.

And for more of the same (in much better quality), check this other short film, The Golden Key.
Posted by Monkey at 10:18