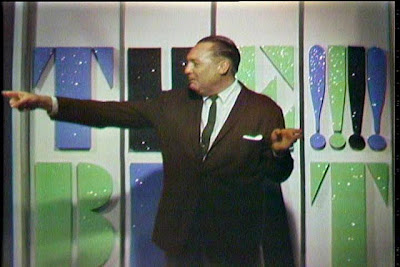 The !!!! Beat (hereafter referred to simply as The Beat) was a music television show like no other. Across twenty-six half hour episodes during 1966 it featured exclusively R&B, blues and soul acts. The artists were backed by a house band, The Beat Boys, lead first by the grinning Gatemouth Brown and later Johnny Jones after Brown realised he could make more money from touring than doing the show. On podiums local go-go girls danced and shook their thangs as if hearing songs for the first time and Frank Howard and the Commanders would occasionally run on to perform a routine of manic soul spins, splits and their trademark marching-on-the-spot dance.

Keeping it all moving was host and man behind the show William “Hoss” Allen. Hoss - a big name Nashville DJ - had worked for Chess, ran his own Athens and Hermitage labels, had promoted black artists since the late 1940s and managed many of the acts that appeared on The Beat. Unlike most other music shows at the time The Beat was not filmed in front or amongst an audience but in television studio in Dallas (as Nashville didn’t have facilities capable of filming in colour). It was a smart move by Hoss as the colourful purple and green pop-art set and the artists’ stage outfits would’ve been wasted in black and white. Hoss introduced the songs and would have a quick word with the acts, calling them “honey” and “darling” – and that was just the men. It’s funny to watch this portly, sometimes tipsy, older white guy jive talking with his guests who seem to find the whole thing rather amusing. The majority of songs were performed live but some were (badly) mimed and the finale involved Hoss bringing all the acts back and them having a rave-up and all dancing and singing together. Watching Hoss’s obvious enjoyment as his two flat left feet try to keep up with his more nimble guests is a highlight of every show.

All 26 episodes were released on DVD by Bear Family Records in 2005 and I can’t recommend them enough, although having to buy six individual discs is expensive. It’s interesting to watch the dated doo-wop harmony groups side by side with the new James Brown Sound ushering in a brand new bag. Brown doesn’t feature in person but his songs frequently do. The mixture of artists ranged from seasoned performers like Etta James, Joe Tex, Little Milton, Carla Thomas, Freddie King and even Louis Jordan to nervous teenagers still at school. Nerves though weren’t a problem for six year old Little Gary Ferguson who sang about being a “Bad, Bad Boy” and grabbed his crotch inappropriately whilst stomping around in oversized Chelsea boots.

There are too many highlights to mention but a guitar chopping Barbara Lynn is coolness personified and being able to now visualise Rodge Martin, Big Amos, Bobby Powell, Mamie Galore and Gwen Davis who’d only previously existed as names on records labels in my DJ box is priceless.

The final episode was a bitter-sweet affair. It had one of the strongest line-ups - Sam & Dave, The Bar-Kays, Garnett Mimms, Percy Sledge, The Ovations, Patti LaBelle and Otis Redding – but Hoss was so distraught his show was being axed he reportedly got so drunk the producers gave presenting duties to Otis. There are plenty of clips on YouTube if you can’t get hold of the full shows. Hossman, thank you honey.