SAVAGES at the ELECTRIC BALLROOM 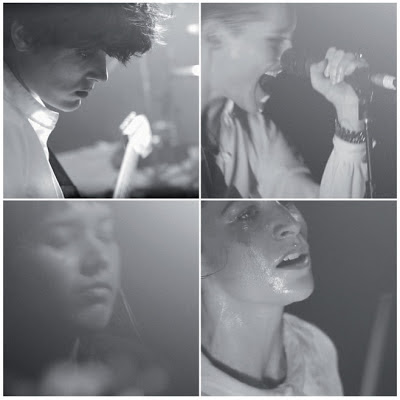 A band of four women called Savages beating life into the neglected corpse of post-punk artsy rock. It’s such a perfect a concept it’s a wonder it’s taken so long.

Hardly a year since their first gig and with only one single and a live EP behind them Savages are packing a thousand people into the Electric Ballroom. The anticipation is palpable, only a few months ago they were playing small pubs and now they’re being touted by sections of the music press as the best band in Britain. Tonight they’re under scrutiny. Are they really that good?

Savages’ two most common (and easiest) comparisons are Joy Division and Siouxsie & the Banshees and there are elements of both, not least with Jehnny Beth’s manic arm pumping, Curtis hair and stare and the way she punctuates her vocals with sharp Siouxsie-like yelps and howls. They don’t sound as much like the Banshees as I expected or hoped apart but they are dark, intense, abrasive and have knotty rhythms driven by bassist Ayse Hassan and drummer Fay Milton. Gemma Thompson less plays a guitar and more plays with it – throwing out shards of scratchy sound and waves of crashing noise.

The head battering raw power of “City’s Full” and “I Am Here” stand out but with only five released songs there’s much unfamiliar material. Lacking any real immediacy - there’s nothing as corny as big choruses, catchy hooks or instant melodies – the set drags in the middle when the pace drops before a speedy livener (my notes read “fast loud shouty one”) followed by their ace-in-the-hole “Husbands”, which is frightening on record and bloody terrifying live. They close with a repetitive funk chant of “Don’t Let The Fuckers Get You Down” which feels a cheap shot, too calculating, and unbecoming of them.

Savages are at the in-between stage of being too big to play 35 minute sets in Dalston pubs and not offering enough to sustain interest here for a full hour. A few more “Husbands” would help but it’s early days and the real judgement will come with an album.
Posted by Monkey at 10:16