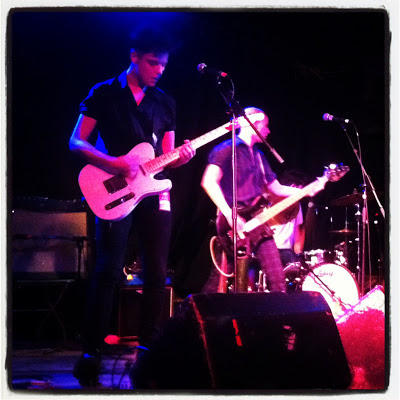 My gig list for 2012 resembled the invited guests to a Darby and Joan Club tea dance so I've vowed to make a greater effort to see younger bands on an upward trajectory rather than those whose peak has long since passed. Glaswegians Baby Strange meet the criteria perfectly. The combined age of Johnny Madden (lead vocals and guitar), Aidan McCann (bass) and Connaire McCann (drums) is less than one member of The Who and they only played their first proper gig in October. Their one release was 50 copies of a cassette (a cassette! How brilliantly contrary) but with the minimum of fuss they’ve made and uploaded three videos to YouTube. Those, along with sharing a name with a T.Rex song, were enough to drag me out on a chilly Tuesday night to witness their first London gig.

“Pure Evil” is the song that grabbed me first from those videos and is their standout song tonight. A blast of pulsating and sinister rock and roll. “Ooh! Ahh!” it punches to the ribs, “I’m tired of my generation,” they complain. Remember those first three minutes when the Black Rebel Motorcycle Club released "Whatever Happened To My Rock 'n' Roll?" and seemed exciting? It’s a bit like that. “Want It/Need It” is a frantic wash of distortion with the equally dismissive sentiment, “I don’t want it” snarled out. I’d expected the whole set to sound similar but other songs unexpectedly echo the punk Class of ’77: short sharp snaps – “Never Understand” only a minute long – delivered with hooks and the bristling energy of a young Joe Strummer or Wilko-infatuated Weller. “Violate Me” is as dark as the title suggests but if they’re still finding their feet stylistically they’d do well to avoid the slower lighters-in-the-air blandness of “Mess” (watch that become a big hit now). My only other slight criticism is Aidan’s newly shaved head. Come on son, you’re a young lad, plenty of time for a slaphead – ask Pete Townshend. Hair is important in rock 'n' roll. Remember what James Brown said, "Hair and teeth. A man got those two things, he's got it all".

It isn’t easy or a lot of fun travelling 400 miles to play 25 minutes to 50 people as a support act but bands starting out have to do it and in Baby Strange’s case it won’t be for long, especially when “Pure Evil” gets a vinyl release in April and makes all the Best Single of the Year lists come December. During “Want It/Need It” they claim, “It’s all right, it’s okay, we’re not gonna make it anyway” – I wouldn’t bet on it.