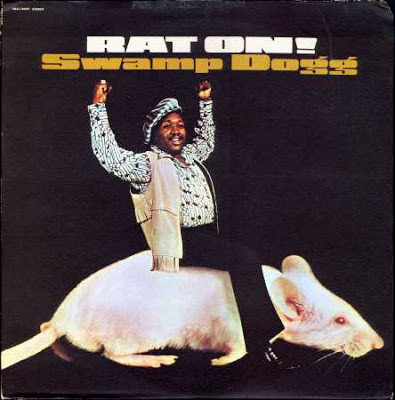 "Sitting on a cornflake, riding on a roller skate!” Those opening words to the thumping  “Total Destruction To Your Mind” show Swamp Dogg’s worldview doesn’t necessarily come from the same place as us ordinary folk but he was writing and singing about the things relevant to most. As he explains, “Commencing in 1970, I sung about sex, niggers, love, rednecks, war, peace, dead flies, home wreckers, Sly Stone, my daughters, politics, revolution and blood transfusions (just to name a few), and never got out of character.”

And what a character it was. With the release of It's All Good: The Singles Collection 1963-1989 I wrote how Jerry Williams created Swamp Dogg after years of relative obscurity, knocking out records and productions under a variety of guises. His first two albums recorded under his most enduring moniker have now been legitimately reissued for the first time on vinyl (plus CD and download etc) and they’re both excellent throughout.

In his brief liner notes Dogg suggests these albums sold millions due to bootleggers ("thieves", he calls them). There’s no way of proving that but a couple of things strike me about them now. Firstly, they are as solid a pairing of soul albums as you’ll find from that period. They have moments of humour (Swamp possesses one of those voices which make things sound funny even when they aren’t) but they aren’t jokey or over the top, he plays it straight. Lyrically he addressed the same issues Marvin Gaye did on What’s Going On; this was Soul With A Conscience. Marvin’s album though was a no-expense spared affair with a lavish production and Gaye on the cover looking moody and serious standing in the rain with his expensive collar up; whilst Swamp recorded his with a tight funky band of Muscle Shoals soul men and was pictured sitting on a garbage truck in his shorts and cheering while straddling a giant white rat. Which brings me to my second point, those silliness sleeves don’t communicate how good the music is and how under appreciated these records are and Swamp/Williams is within the soul universe. When Rat On! has been mentioned in the intervening years it’s been in the Worst Album Sleeves of All Time lists, a fact Dogg acknowledges now. “This left-handed accolade has helped this masterpiece continue to sell and avoid obscurity”. That was him calling his own album a masterpiece. I wouldn’t go quite that far but Total Destruction To Your Mind is essential listening and Rat On! isn’t far behind.

Total Destruction To You Mind and Rat On! by Swamp Dogg are released by Alive Records on 5 March 2013. 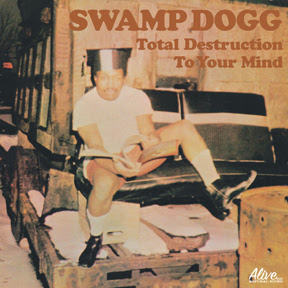