WHO WE ARE: PETE TOWNSHEND IN CONVERSATION/ MODS AND FRIENDS OF THE WHO IN THE PUB 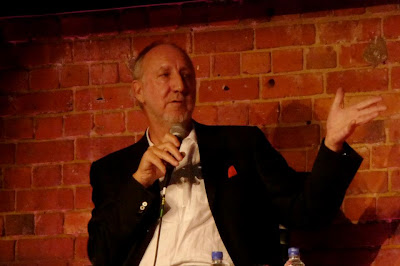 Side One. The Old Truman Brewery, Brick Lane, Bethnal Green.

Two chairs on a stage in front of a projection reading “Will Hodgkinson in conversation with Pete Townshend”. Hundreds of chairs squashed together facing them. Please welcome, Pete Townshend. Pete talks. Feedback screeches. And again. Hodgkinson makes same auto-destructive art gag twice. Not a conversation, more a monologue. Will, wearing nice brown suede boots, and audience occasionally interject but otherwise it’s all Pete for over an hour promoting his autobiography Who I Am. Throw him a crumb and he’ll bake you a cake. Lots about being an art student in 1961. Drifted into pop music. Had to leave pretty college girls to his mate Barney - Richard Barnes - whilst he did gigs and waited for the fight to start. Wrote early songs directly for his mod audience. Was easy as mods were all the same. Now his audience are old and complicated he can’t write for them. As the male mods got more effeminate the female mods got more masculine, no Bridget Bardot glamour: short hair, dark straight shirts. Wrote songs as demos to play to the Who whereas John came in with the music for “Whiskey Man” and “Boris The Spider” written out. Keith and John preferred the lighter songs like “Happy Jack” and dressing up in silly clothes. Roger would complain songs weren’t working class enough. Has no favourite songs from his solo catalogue and doesn’t think of them as separate from his other writing. Doesn’t mind doing gigs but doesn’t love them either even though he says he is great at them. Love for the Rolling Stones. Even when they are crap, Jagger is incredible. Brian Jones gets a bad press but was always nice to Pete and was a musicologist. All of them were cool to hang out with. The Beatles were okay but came from a slightly earlier showbiz tradition and then bridged into the younger generation. More art school reminisces. Lecturer said in 1961 everyone would have computers by 1965. Sly and the Family Stone brilliant at Woodstock. They repeated the refrain “I Wanna Take Your Higher” over and over until the slumbering crowd woke up and got into it. The Who repeated trick with “Listening To You”. Keith had a great way with words and said two girls “were attached” to him and John in van before Woodstock. Pop music is a vehicle for a communal experience for the audience to lose themselves in a crowd and become one. They aren’t there for Bono, they are there for themselves. Can never have a conversation with Bob Dylan. Dylan likes the ladies and happy to chat away with Pete’s partner Rachel. Does impression of Bob talking to Rachel. Tried to attract his attention. Bob eventually looks up and says “Where’s Roger?”

Hundreds queue for book signing. Military operation. Staff open book, bung it in front of Pete, flicks his pen, pick up your book, move on, next. No signing anything except book, no posing for photos. Can you put ‘To Mark and Paula’? Too late. “No, but you look very stylish the pair of you. Really great." Okay, thanks, that’s even better. Said same thing to friends David Edwards and Claudia Elliott moments earlier. Shake hands. Looks older close up Paula and her sister Karen ask for a hug. “No, but I take it back about mod girls, you've got in down pat. You’re both very sharp”.

Arrange to meet Moonie’s loyal assistant and Full Moon author Dougal Butler in the pub. Off we strut – a procession of mods and Who glitterati - including Richard Barnes and Doug Sandon, drummer from The Detours. Dougal and Barney regale the mod corner with their tales. Dougal tells of he and Moonie nicking jackets from two sleeping policemen, find car keys in the pockets and take it for a spin, sirens blaring, and return before they woke. Does a little dance and sings "We are the mods". People on Facebook ask him random stuff like where Keith bought that jacket he was wearing in photo from 1971. How the fuck should he know? Talking of random questions, where did Keith get his elephant’s foot table? The one in the picture with him playing records wearing crushed velvet trousers, wife Kim in red tights and daughter Mandy playing? It wasn’t a table it was a planter and Dougal still has it. Bought in Mombasa. Keith and Kim also bought a smaller one with a lid for John and Alison Entwistle’s wedding present. Alison recently gave it to Dougal. Full Moon doing well and getting good press in America. Rumours Roger Daltrey has been offered a huge advance to write his autobiography.

Barney signs my copy of his Mods! book. The Bible since I was thirteen. Surprised the pages aren’t falling out. They are. The Scene club had the most discerning mods. Goldhawk Road and his own Railway Hotel were just for locals. Guy Stevens had the most amazing record collection. Calls Dave Edwards the new Guy Stevens. The footage of the High Numbers at the Railway Hotel on the Amazing Journey DVD made him think they were better than he gave them credit for at the time. Didn’t think mods would like them at The Scene as they were so loud and mods would sooner listen to James Brown but they did. The Action were good but The Small Faces were the other great ones, especially for Steve Marriott’s voice. The photos in Mods! and Pete’s book of The Who dancing at The Scene, were they staged or genuine? Genuine. Who was the best dancer? Pete, as coming from a showbiz family didn’t mind making a fool of himself. Roger was too stiff back then and basically a rocker. Pete the only one that really connected with mod. Pete can change like that. Click. Barney's voice sound similar to Pete's.

Landlady chirps in with how she knew Kenney Jones. Been in East End all her life and lived on same street, Watney Street in Stepney, as him. Got lost together in Hampton Court maze. Buddy Ascot from The Chords with us. Nice fella. He’s surprised people are still interested in the mod revival period. I'm not but loved his band The Rage back in ’84-’85. Man approaches to tell us about a Simon Townshend gig. Buddy forced to reveal what band he is in. Man’s face drops. Mouth wide open. Frozen. Still frozen. Oh. My. God. Utter disbelief. The Chords are my favourite band after The Who he says. Mine too says Buddy. Move away. Man says he went off band when they changed logo and put the “o” in Chords into a square. Stumble from pub. Newspaper reports of Kray twins on chip paper. 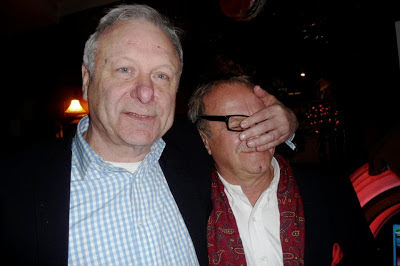 Many thanks to Claudia Elliott for photographs of Pete Townshend, Richard Barnes and Dougal Butler.
Posted by Monkey at 09:31

Labels: dougal butler, east end, full moon, mods, pete townshend, richard barnes, the chords, the detours, the small faces, The Who, who i am