THIRTY YEARS OF THE TRUTH: FROM THE MARQUEE TO THE BORDERLINE (AKA MY MOD STORY, 1982-83 SEASON) 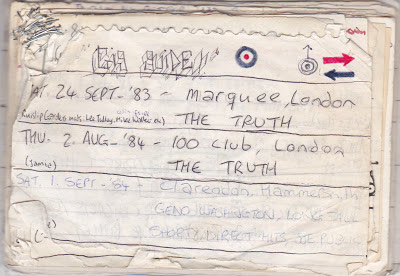 I wish the first gig I went to was The Jam on their farewell tour in December ’82. For years that’s what I told people but in fact it was The Truth at the Marquee the following year. It should’ve been The Jam but by the time Monkey Snr drove to Wembley Arena they’d sold out. If that wasn’t disappointing enough a group of lads from school went, most of who had previously shown no interest in the band, whereas I’d been a die-hard fan for, ooh, over a whole year. It was so unfair.

In those days all the cool kids “turned” something: be it mod, skinhead, psychobilly, soulie or slightly later, heaven forbid, casual - our football team was full of bloody casuals. It wasn’t uncommon for kids to switch sides on a whim but I eased my way into mod gradually. Following The Jam over that year (more about it here) got me interested, especially after a two-page feature in Smash Hits where Paul Weller discussed his favourite things: sunglasses, cufflinks, the Small Faces and so on. That was a big influence, as was my mate Lee, the goalkeeper in our Sunday football team, who was a young (thirteen/fourteen year old) mod. After training one Saturday Lee sold me a parka. It was gigantic, the pocket was hanging off and it whiffed of Rothmans. My mum wasn’t too impressed when I sheepishly stepped through the front door. “You’re not going out in that. We don’t pay good money for nice clothes for you to look like a tramp.” Mum had a fair point (not that I thought so at the time) but I wondered if she was concerned I was getting myself mixed up with yobbish mods.

This meant I hid the parka in a bin liner over the park that backed onto our house. On the way to school I’d rescue it from inside the tree it was hidden in and return it on my way home. I added some Jam badges to it including a good “Funeral Pyre” and a Who one in a target. This worked fine until the first time in living memory the London Borough of Hillingdon chopped down the trees, gaining themselves a tatty parka in the process.

School uniform consisted of Fred Perry jumpers, sta-press, tassel-loafers or DM shoes, and the tie tied with the skinny side showing and the kipper tucked inside the shirt, so it wasn’t a huge leap to mod it up a bit, especially with the parka. Out of school the clincher - to seal allegiance to the cause - came with the purchase of my black and white Jam shoes. The badger ones, in leather rather than the more popular suede. That spring of ’83 I proudly wore them to my uncle’s wedding. “Why are you wearing your football boots?” he asked.

With The Jam out of the way, by accident or design (and the timing did seem fortuitous) Dennis Greaves abandoned the pub R&B of Nine Below Zero and moved into modish pop-soul territory with his new group The Truth. Their debut “Confusion (Hits Us Every Time)” entered the charts in early ’83 (bearing more than a passing resemblance to “Beat Surrender”) and was followed by “A Step In The Right Direction”. For us kids too young to really have had The Jam as our own, we had The Truth. It suited both parties for a while; we had a band and The Truth had an eager young audience.

The chance to see them, to go to my first gig, came on Saturday 24th September 1983 on their Sounds Like The Truth tour. They played an under 16s matinee show sponsored by music paper Sounds who printed a 50p-off voucher which I cut out and took along. I went with Lee The Goalie who, in every respect, lived across the tracks from me. I rode round to his house in Ruislip Gardens on my Commando (at fourteen too young for a scooter and, quite frankly, too old for a Commando but it was a couple of miles from Ickenham). I was wearing a dark blue short-sleeved Brutus shirt, blue sta-press and, of course, my Jam shoes. With my wardrobe having not caught up with my new found ideology I still hadn’t a decent jacket so wore this rather plain reversible zip-up blouson. It was grey, or if turned inside out, blue. I had it the blue side.

My discomfort at this outfit wasn’t helped when I turned up at Lee’s only for a load of his mates I didn’t know to already be there and kitted out far smarter than I. I sat quietly on the settee until one of the lads turned to me and said “You can’t wear those.” Those what? “Those shoes. Jam shoes, they won’t let ya.” Eh? “Takes the piss, don’t it? Jam shoes, when they’re The Truff.” You’re joking. Aren’t you? Lee wasn’t a great help, “It’s true, they said in Smash Hits none of their fans wear parkas or Jam shoes”. So what am I supposed to do? “Just have to leave them in the cloakroom.” Oh great, going to watch my first gig stood in white towelling socks.

We eventually got the Central Line into town and after knocking about Carnaby Street went to the gig on Wardour Street. The band were hanging out in the foyer meeting us fans. I had my 50p-off voucher signed by singer/guitarist Dennis Greaves, bassist Brian Bethell and Hammond man Chris Skornia. The gig itself was hot and sweaty as we all leapt around like little mod loons. At some point during the day I’d acquired a navy boating blazer with thin mauve and sky blue stripes. As boating blazers went it was tasteful but meant I was wearing it with that bloody blouson thing tied around my waist. Not a good look but at least I wasn’t required to remove my shoes. I was impressed the band put everything in their performance even though they had an evening show directly after it. Like The Jam before them they didn’t act like pop stars and they didn’t treat us like kids. We all went home in very high spirits.

My next gig, and first grown up one, was also by The Truth (being an archetypical Virgo I created lists of everything including gigs, see above), this time at the 100 Club when they recorded their Five Live EP. The Jam shoes had been replaced by white bowling shoes and I had my mum sew a large patch “The Truth – A Step In The Right Direction” on the back of my green flight jacket. “This will be like having your name on your coat,” she said, “if you get in any trouble you’ll easily be identified.” That was another great gig, as were a few more but they were backpedalling hard to get away from being associated with mods and it created an increasingly acrimonious atmosphere between the two camps.

That was that until last Friday when celebrating their 30th anniversary The Truth were back on stage at the Borderline, only a few street away from the old Marquee, with their original pre-“Confusion” line-up. On the rare occasions I’ve tried to listen to their records since the mid-80s I’ve winced at how of-the-time they sound but hearing them played live again they sounded so much better, much fuller. “Love A Go Go” was pure sing-along Marquee memories; I’ll always associate “Nothing’s Too Good For My Baby” with The Truth rather than Stevie Wonder; “I’m In Tune” was another rollicking Hammond workout; “Just Can’t Seem To Stop” had Greaves – still big on audience participation – engaging in some call and response with the crowd, not all who’d seen them back in the day. It was a nostalgia show but far more enjoyable than I’d expected with most songs sounded fresh and full of life. They were having fun but had obviously put in a lot of rehearsal hours. “Not bad for old cunts,” said Greaves. Not bad at all. Oh, I suppose you're gonna ask: APC black corduroy Nehru jacket, Peckham Rye scarf, bespoke dogtooth trousers and black Chelsea boots. 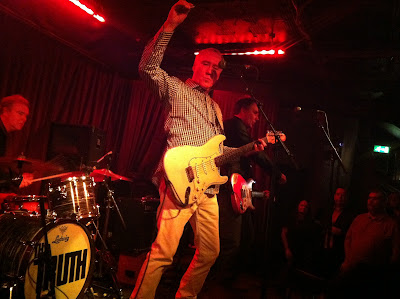 Labels: confessions of a teenage mod, mods, the jam, The Truth