FRIDAY NIGHT AT THE LONDON PALLADIUM: THE LOVELY EGGS and SHRAG 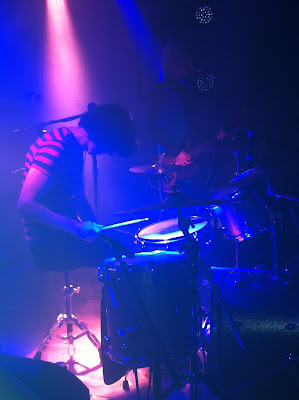 Friday night at the London Palladium. As a venue to spin a few sounds goes, it takes some beating. To give you an idea how posh the Val Parnell Room is, I had a private en-suite bathroom next to the DJ decks and the offer of a face massage by the Palladium’s in-house beautician. Danny from Heavenly Records, also DJing, had one and said it felt weird but oddly relaxing. I gave it a miss. Nice offer though. The main room was beautiful: all white pillars, ornate domed skylight, plush carpet, and framed posters of old Palladium bills hung on the walls. Bruce Forsyth's 1973 "One Man Laughter Show" gazed down on me (surely it was funnier than that). A fantastic and imaginative scoop by promoters Idle Fret.

I’ve done a few Idle Fret gigs now and always enjoy them as being a bit out of touch these days I get to hear bands I wouldn’t normally know about. First on were Giant Burger. As they began I raised a foot to step nearer and they started to sing. Well, not actually sing, more go ARRGHOOAOOOAHH! really loudly and accompany it with the sound of dustbins full of marbles tumbling down a metal staircase. My foot recoiled in mid-air moonwalk horror. Take a seat Grandad. From a distance my tender ears acclimatised, to a degr Burgers weren't to my taste. I’d investigated Shrag the day before and from the odds and sods on YouTube I felt I’d either like them a lot or find them bloody annoying. I liked them a lot. Main singer Helen does a stroppy teenager routine: one moment bouncing excitedly up and down in her stocking feet, the next throwing herself to the floor in a moody tantrum. Other girl and boy voices criss-crossing a fat rolling riot grrrl groove added to a very watchable, very listenable set. Hell, I was so impressed I bought the album, Canines, and look forward to seeing them again.

Long time favourites The Lovely Eggs were top of the bill. I don’t know whether it was the venue, the dry ice, the extravagant light show, the PA, the beer, or a combination of it all, but they rocked like mothertruckers. Seriously, their grunge punk onslaught sounded so much heavier than usual and the in-between song northern humour cut to a minimum. A couple of newies from the forthcoming Wildlife LP fortunately didn’t reveal any drastic change of direction from the previous few singles and when they slowed it down for “Fuck It” scarves emblazoned with its name were held aloft. (I flipping well forgot to buy a blue and white one. Fuck it.) A barnstorming, sausage roll crumbling finale of “Don’t Look At Me” had Tommy Trinder’s poster shaking in its frame.

Below are the songs, mainly punk and garage, I played. Was a new experience to use CDs (no record decks available) but I muddled through, only ballsed up a couple of times, but I bet the Palladium has never heard "Spazz" by The Elastik Band before. The first set was early doors, the second between Shrag and The Lovely Eggs, and the third had a few dancing after the Eggs until closing time. Fab.