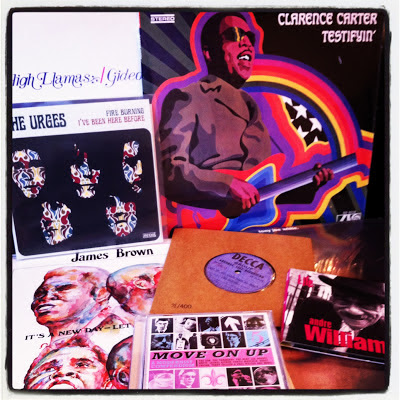 Popular spins in Monkey Mansions this month include:

1. Grant Green – “Have You Ever Had The Blues?” (1963)
Guitarist Green may have had top billing but Big John Patton’s Hammond takes centre stage. Taken from the excellent Blues For Lou LP which incredibly had to wait 36 years before release.

2. The Action – “Why Do You Wanna Make Me Blue” (1965)
Talk about unearthed treasure. This was the audition disc The Action cut for Decca on 31st May 1965 and the earliest evidence of their brilliance. They attack The Temptations at quite a lick but once they settle down it has everything we’d come to know and love from our Kings of Kentish Town: Reggie King’s passionate vocal, the three-part harmonies and the chiming guitars. Only available as part of the deluxe edition of the In The Lap of The Mods book which is utterly essential. Full review to follow.

3. Clarence Carter – “Snatching It Back” (1969)
The sound of Muscle Shoals. The whole Testifyin’ album is a bristling soul cracker.

6. The High Llamas – “Checking In, Checking Out” (1993)
With the vogue for bands marking anniversaries by performing “classic” albums, I’m hopeful The High Llamas will play Gideon Gaye next year, for it’s an album worthy of such an accolade.

7. Andy Lewis featuring Keni Burke – “(Love Is) Alive In My Heart” (2005)
The best soul-pop song The Style Council never made.

9. The Urges – “Fire Burning” (2012)
Irish bowlheads add a touch of brass to this frantic and infectious Whiskey-A-Go-Go-esque club shaker.

10. Andre Williams – “Stuck In The Middle” (2012)
Since the mid-50s Williams has been around the musical block and in some dark alleys but he’s back in Detroit and in good shape on his new LP, Life. Opener “Stuck In The Middle” is the best track with Andre’s trademark laconic vocals set against a bar-band Funkadelic groove.
Posted by Monkey at 10:19