THE MAGNETIC MIND at THE VICTORIA, DALSTON 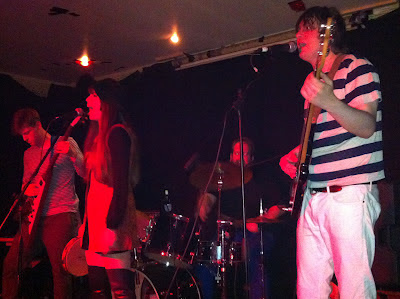 Watching the Magnetic Mind on Friday made me think how few bands I’ve seen who truly capture the West Coast sound of the Peanut Butter Conspiracy, the Strawberry Alarmclock, the poppier end of Jefferson Airplane and even the Mamas and Papas. Psych rock, garage punk and Byrdsian jangle are ten a penny so it made a change to hear a touch of Haight-Ashbury inspired peace and love on London’s Murder Mile.

Debut single “Maybe The Stars, Maybe The Sun” is typical of the Magnetic Mind style with its three-part up, up and away harmonies and swirly organ breaks, whilst the swinging cover of “Sweet Talkin’ Candy Man” by the Carrie Nations from Beyond The Valley of the Dolls further nailed its friendly freak flag to the psychedelic mast for the gentle people. Light the incense and listen to their 45 here.

“Maybe The Stars, Maybe The Sun” by The Magnetic Mind is released on Heavy Soul Records.
Posted by Monkey at 08:25