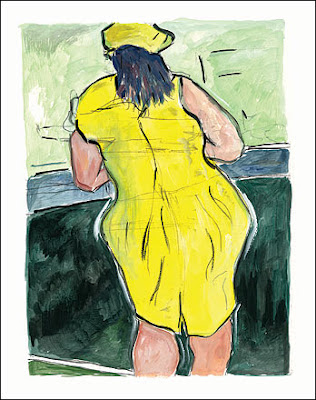 “Nowadays people know the price of everything, and the value of nothing.” – Oscar Wide, The Picture of Dorian Gray.

I went to a West End art dealer the other week to see The Drawn Blank Series 2012 paintings by Bob Dylan. They were in fact prints (or rather “Graphics” as they appear to be called nowadays) and similar to the ones first shown at the Halcyon Gallery in 2008. In numbered, pencil-signed editions of 295 they were on sale for around £3000-£5000. They depicted flowing rivers, fat arsed women, misspelt restaurants, bars, bicycles and - if the Van Gogh influence wasn’t clear enough – sunflowers. I wrote about his paintings previously here, and it still applies.

As I was leaving I was asked if I’d seen anything I’d liked. Not enough. “Well, these are only prints of course. If you’re interested in an original I’ve got one for around half a million pounds.” Oh right, pass me my chequebook. We chatted about Bob and how well his paintings and prints sell and how their resale price has already increased with collectors buying multiple works. Because they're an investment still doesn't make them attractive in my book but I must’ve somehow passed as a potential buyer as she gave the 38 page brochure (price £10) for free. I've flicked through it twice.

Bob Dylan’s 35th studio album, Tempest, is out now. The CD cost £8.99. For a man of 71 old Bob doesn’t sound a day over 701 as he growls like he’s battling Tom Waits in a throat clearing competition. It’s too soon for me to judge how it compares to his other 21st century albums (they tend to be slow burners) but it has the same old timey, late-night, cigarette smoke and whiskey feel. I’m not keen on the last twenty-something minutes being taken up by a track about the Titanic and a soppy tribute to John Lennon, but there’s nothing wrong with the preceding eight numbers from the steam train chugging “Duquesne Whistle”, to the surprisingly tender and beautiful (yes, beautiful) “Soon After Midnight”, and to singing songs for flat-chested junkie whores in “Scarlet Town”.  Special mention to “Pay In Blood” for a set of Bob’s most savage lyrics.“I got something in my pocket make your eyeballs swim/ I got dogs could tear you limb from limb” and “Another politician pumping out the piss/ Another angry beggar blowing you a kiss/ You got the same eyes that your mother does/ If only you could prove who your father was”. Brutal.

Anyone looking to buy Bob Dylan’s art would be well advised to purchase his twenty best studio albums, a list that - a quick count-up shows - includes Tempest.

Tempest by Bob Dylan is released on Columbia.
Posted by Monkey at 10:57